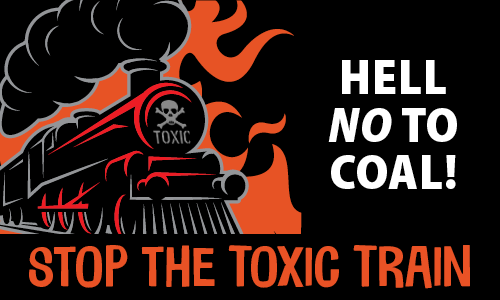 A secret, clandestine operation – hiding behind an anonymous LLC out of Wyoming – wants to ship millions and millions of tons of coal from Montana, Utah and Wyoming to the North Coast utilizing the now defunct North Coast rail route. It would then be loaded onto ships, sold overseas and burned.

You read this right. An anonymous group of Big Coal supporters wants to ship trainloads of this stuff, one of the earth’s worst carcinogens and toxic pollutants, through our home towns, along our rivers and through our farmlands in Marin, Sonoma, Mendocino, Trinity and Humboldt counties.

To add insult to injury: They want to stop the Great Redwood Trail that would traverse this same old rail route.

We’ve made amazing progress on the trail over the past several years. The trail would meander through ancient redwood forests, oak studded golden hills and along our mighty rivers which are the drinking water sources for nearly one million residents.

We can’t stand for this. We must say HELL NO to Coal!

Please sign our petition today. We will forward this petition to the Surface Transportation Board, the federal agency that will approve or stop the toxic coal train in its tracks.