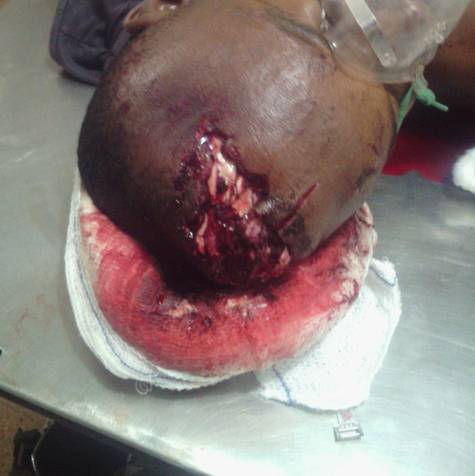 I am writing this petition to bring the attention of the general public to the recklessness at which some Nigerian Policemen operate. This recklessness has cost my dear friend the life of her husband.

Mr. Chinedu Uzor was returning from a social club meeting on the 19th of July 2015 at about 10:00pm, and as a usual habit of his, he drops off members who are not mobile, he had just dropped off all but one and decided to join the Enugu-Abakaliki express way, but rather than get to the turning, he joined the road through the pedestrian walkway, when he did this, the policemen on patrol noticed this, and pursued the car, unknown to Mr. Chinedu,he had no idea the people chasing him were policemen because they shot sporadically into the air while chasing him. He just wanted to run to the nearest checking point for safety

On getting to Sperando junction, he stopped at the checking point there, put his car off and raised his hands whilst still seating inside the car, screaming at the policemen to come and help him. The other patrol team came there,double-crossed him and one Mr. Agbor Onwe Emmanuel, an inspector, in charge of Van 023 from Ezzamgbo ( A mobile policeman from Abakaliki headquarters) , came down from the van and shot Mr Chinedu on his head and and arm at close range with an AK-47 gun.

This isn't how the Nigerian Police is supposed to protect its citizens. They have even gone as far as offering to buy the witnesses' silence.

I am requesting that justice prevail, no life is more important than the other, everybody deserves a right to fair hearing and life.

Attached are pictures of the the wound to his head. Viewers Discretion is Advised.

Please help sign this petition, it's about time we Stand for fairness and Justice. Spread the word.

Thanks for your attention on this matter.