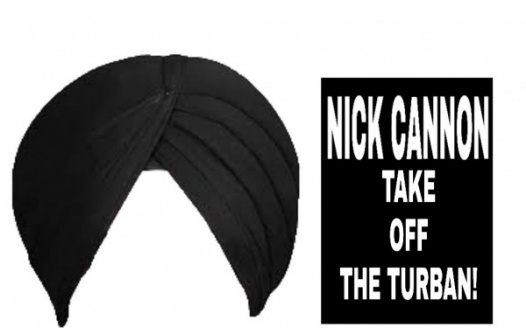 NICK CANNON TAKE THAT TURBAN OFF YOU DON'T REPRESENT THAT CULTURE

We, the collective of unapologetically Black thinkers, would like for Nick Cannon to take his turban(s) that he has been donning recently, OFF. There were many Black cultures that wore the turban righteously. One of that said group was the Moors, who ruled and controlled vast lands in the west. They brought Europe into the Renaissance and created mathematics. Their rule was one of peace yet strength encouraging citizens to be creative, expressive, and artistic. They never apologized for conquering and gave many continents a new light. Though you wear a variation of the head gear they wore and many other Black warriors as well you clearly are not of the caliber of these brave men and women. Right now, you wearing this after apologizing for being Black, is cultural appropriation. If you were culturally connected to them you would not only stand in the truth you would BE the TRUTH, and everyone would see that, no apology needed. We the collective of unapologetically Black thinkers is asking you to Remove your head dress Nick. It's time. Every moment you wear that you are causing children to be cowardice. Your hurting the ones you wish to help. We are not doing this for humor, likes, or loss of love we want to see you win! You are still OUR brother you are just not THAT brother, not yet. The turban must be earned. Definitely wish to see you on the other side here with us because there is no threat or promise or anything that will shake us out of our skin. We stand in unity, Unapologetically Black