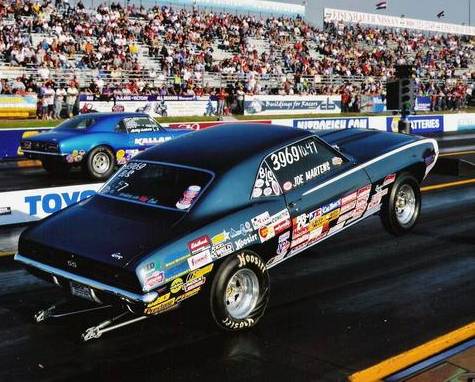 1709 people have signed this petition. Add your name now!

Please accept this petition as an act of support for your sanctioning body of which we have all long been part, whether it be as a competitor, crew member, or spectator. We acknowledge the fact that your Mello Yello series is a number one priority and draws the most fan attention, viewer counts, and ticket sales. The TV coverage is well prepped and put together while the commentary by the reporters is well versed.

What your sanctioning body may or may not realize is that when NHRA airs its Lucas Oil Series coverage the following week, many viewers gather around to watch what seems to be a full 57 minutes of Alcohol Dragster and Funny Car, in hopes of seeing 3 minutes of final round Lucas Oil Sportsman coverage of Stock Eliminator, Super Stock, Super Gas, Super Comp, Super Street, Top Dragster, Top Sportsman and Competition Eliminator. However, sometimes this coverage goes by the wayside and may not even be shown. To say the least, this is a slap in the face to the competitors who live, breath and fight their way to partake in this passionate sport and give all they have in hopes of achieving victory, hoisting a wally, and having ten seconds of fame on your TV coverage. With this lack of coverage comes a surplus of spectator ignorance involving our sportsman categories. With this lack of spectator knowledge comes lack of spectator viewing which then results in a lack of sponsorship opportunity for the sportsman racer. With lack of sponsorship in this expensive sport and in these economic times, many racers are forced to stay home. What we are asking is this: The last three (3) rounds of each sportsman category to be aired during your Lucas Oil Coverage. That is 35 match-ups, with each race taking an average of 20 seconds between stage and finish line, the total time added to each segment would be roughly 12 minutes. Three minutes of informative commentary would put us at a full 15 minutes. The key will be commentary by a knowledgeable enthusiast such as Lewis Bloom, Brian Lohnes, Alan Reinhart, or anyone who knows the ins and outs of each sportsman category. We are asking for 15 minutes out of a 60 minute segment. Viewer ratings will increase and sponsorship opportunities will potentially open up for racers (higher car counts), and most importantly fan attendance will become more prevalent at National and Divisional races once their interest gets sparked by coverage of cars with which they can identify themselves.