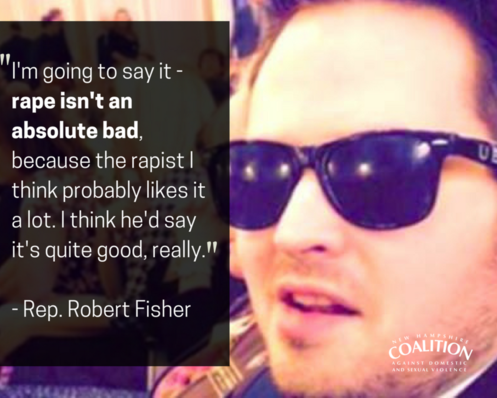 In light of NH State Representative Robert Fisher’s recently revealed pro-rape agenda and egregious actions against women and girls, it has become glaringly evident that, as a state, NH needs to prioritize funding for domestic violence and sexual assault services.

On the same day that we learned about the insidious activity perpetrated by Representative Fisher, a report was released by the CDC that ranks NH among the worst in the nation for victimization of sexual violence – over 1 in 3 women in NH will be sexually assaulted in their lifetime and nearly 1 in 5 men, both of which are significantly higher than the national average and demonstrate a distinct increase in victimization over the last decade. Sadly, while rates of victimization have steadily increased, state funding for critical victim services has plummeted.

We are calling upon people everywhere to demand adequate funding for these critical services. The time to act is now: NH can and must do better.

Sign your name to this petition to ask lawmakers to prioritize funding for domestic and sexual violence prevention and intervention services. We must ensure that the Granite State doesn't create more Robert Fishers.