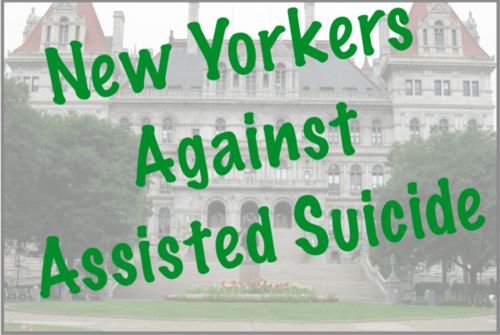 We are OPPOSING New York Bills seeking to LEGALIZE ASSISTED SUICIDE in New York State. Passage will create new paths of elder abuse in which heirs and other predators will be able to pressure and abuse older people to cut short their lives. In Oregon, where Assisted Suicide is legal, patients desiring treatment under the Oregon Health Plan (Medicaid) have been offered suicide instead. Since Oregon legalized Assisted Suicide, other suicides have increased in that state. The financial cost of these other suicides in Oregon for hospital treatment, rehabilitation, etc. is enormous. We do not want nor need the “Oregon Experience.”

PETITION TO THE NEW YORK LEGISLATURE and THE GOVERNOR,

As a legal New York Resident, of 18 years or older, I oppose legalized Assisted Suicide less commonly known as “aid in dying”.