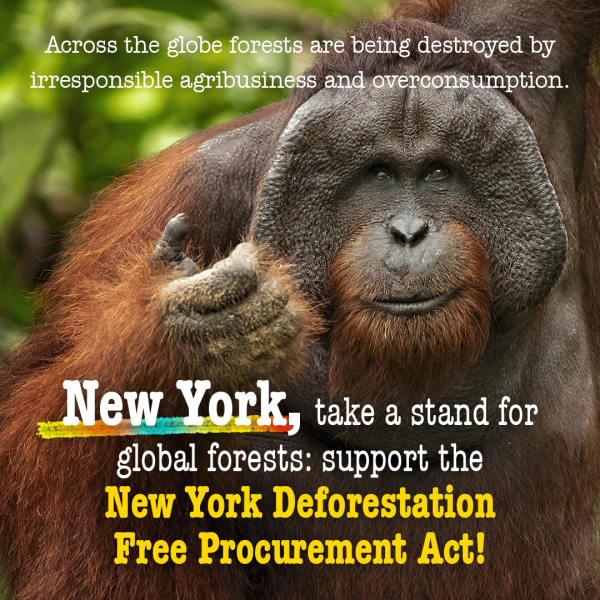 New York: Pass the bill to protect the world's forests!

Help pressure NY lawmakers to prove a groundbreaking bill that can protect some of the world's most vital ecosystems! If it passes, the NY Deforestation-free Bill can really curb deforestation, inspire other states to do the same, and help humanity actually address climate change.

Deforestation is a major driver of climate change. It causes 10 to 15 percent of greenhouse gas emissions worldwide. What's more, keeping forests standing and promoting reforestation is a key solution to reversing climate chaos. If deforestation were a country, it would be the third largest “country” in terms of emissions.

We need to fight for climate solutions on the federal AND the State level, and NY State can lead the way. Bill S.5921 is simple. It would ensure that products New York State buys are not contributing to the deforestation of the earth's most precious forests.

If NY pulls this off, it'll be the first State in the US to do so. But NY won't be alone. In fact, the European Union and the United Kingdom are already creating regulations to curb imported deforestation into their jurisdictions. By having NY do the right thing, we can send a message to other countries and companies that they should do the same.

Sign our petition to pass a strong law to fight deforestation! Be a forest champion and help save this planet for future generations.