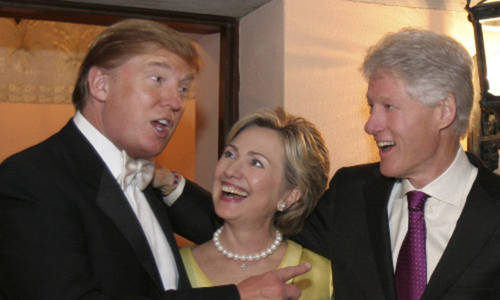 Most of the conservatives I know despise Donald Trump. Most of the liberals I know are disgusted by Hillary Clinton. A recent poll found 65% of voters would consider supporting a third candidate, and 55% actively want some other option. Yet, somehow, we've ended up with two of the least trusted, least popular people in America as the Republican and Democratic nominees.

At this point, we may be out of options. But maybe not.

Suppose, just suppose, that there was a third choice. If you knew a third candidate had a legitimate shot at the presidency, would you consider voting for him or her? The big challenge for third-party candidates is that nobody thinks they can win, but what if you knew millions of other Americans were also planning to vote with you? Well, here's my big plan:

1. See how many names we can get on this petition. If we Americans are really as mad about our dumpster-fire options as we say we are, we should be able to get millions of signatures. If you sign, all you're saying is that, given options (a) Donald Trump and (b) Hillary Clinton, you want an option (c).

2. If this actually goes somewhere (and I really think it can), we'll put together a process for considering, debating, and picking a compromise third candidate. It'll be hard, because we would need a candidate who appealed to Americans on both sides of the aisle. I'm a conservative/libertarian guy myself, and I know I would be unlikely to get my first choice out of such a process. On the other hand, I wouldn't get Trump or Clinton either, so there's that. I think we'd be able to find someone who most Americans would prefer to either of our current two options.

3. At this point, there would be a HUGE amount of media attention. We'll use that publicity to promote a cheap write-in campaign for our candidate. "That's crazy," you say. "That'll never work," you say. Are you sure? If millions of Americans can figure out how to download Pokemon Go, don't you think they could figure out how to write "John Smith" at the top of a presidential ballot?

And that's the plan. Our write-in candidate wouldn't even need to beat the other two candidates. If none of the three candidates get a majority of electoral votes, the Constitution says the election is decided by the House of Representatives. If we had a reasonable, moderate option not named Trump or Clinton, the House would be likely to consider him or her. But hey, let's try to win this thing outright.

Like I said, this is the longest kind of long shot. A successful write-in campaign would be unprecedented, but 2016 has already offered plenty of awful surprises... so maybe it'll finish up with a nice one. At any rate, I've already decided I cannot vote in good conscience for either Trump or Hillary. If I'm going to be #NeverDJTorHRC anyway, I might as well take a final shot at finding a candidate I can actually be proud to vote for.

If you'd like another presidential option in November, SIGN your name (look up and to the right on the page) and then SHARE this petition with your friends.

[Wondering who I am and what I'll do with your info? Well, the short answer is that I'm nobody and have no political connections. I live in North Carolina and write about politics and theology at DavidVogel.net. The only reason I'll ever use your email address is to contact you about this campaign, and I'll never share it with anyone else. Pinky swear.]