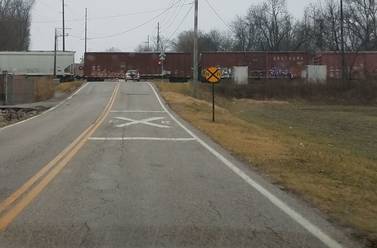 Stop the Railroad from blocking the intersection on Mill Road! NOW!

Since the train tracks on Mill Road (at Kratzville) have become a "switching station" the trains are continually stopped on the tracks and blocking road access on Mill Road and has become a major problem! Trains on this part of the track block the road for very long periods of time. The attached photo was taken on January 2, 2017 and was sitting there for a full hour before it moved!

This is an emergency hazard! Citizens are worried about fire departments, EMS and police/sheriff departments having to "go the long way around" if a train is blocking this intersection! When they need to help someone those extra minutes could make the difference between life and death!!

Neighbors have called CSX as well as 911 on many many occasions when the trains are stopped and blocking the road but nothing is getting any better. In fact, this problem has increased in recent months. If the trains are not completely stopped on the tracks, they are moving so slow that it takes them forever to pass the intersection. This is very inconvenient for the citizens who use this road on a daily basis. We want this problem resolved NOW!

We, the undersigned, are concerned citizens who urge our leaders to act now to stop these trains from blocking Mill Road and causing unnecessary emergency hazards and travel delays!