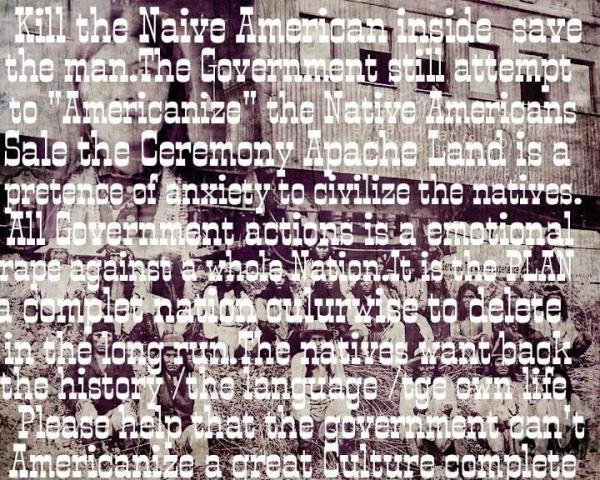 The Republicans say there has never been a Native American genocide.
Therefore, the US must alsonot take the consequences.
The descendants of the survivors of the Native American genocide in today's United States have not only a right to recognition of injustice and of suffered grief but "also on material compensation". With the recent behavior towards the victims in Native awaken the United States "the impression that there was for them two categories of genocide: a entitled to reparation and without" the, with their relations with the Native American victims in the United States put reproach that they judge a genocide of human red skin color as less serious.

The world's conscience buried the Native American prematurely
under a mountain of artificial fantasy stories.
After the almost extinction of the Native Americans in the new america army of writers and screenwriters have created a panopticon twisted and trivialized caricatures of "Native Americans".
The genocide of the Indians has soaked the foundations of the United States with blood. The perfidy, cruelty and systematic slaughter are a closely guarded secret.
But about the surviving Native American, secluded in their reserves and their current problems which the genocide has brought with it the United States world cared very little.
A lot of families in the United States today, which came as settlers at that time to the New World were involved in the Native American genocide that time..
The descendants of the survivors of the Native American genocide, in today's United States have not only a right to recognition of injustice and suffered grief
but also return the Land. of the Native American Nations.
With the previous way of dealing with respect to the victims of the Native American Holocaust bring the United States "the impression that there are two categories of genocide: one with and one without entitled to redress.
With their behavior toward the Native American victims, the United States is open to the charge that they judge a genocide of human with red skin color as less loathsome. Today historians, anthropologists and archaeologists are revealing that information on this holocaust is being deliberately eliminated from the knowledge base and consciousness of Americans and the world. Where are the monuments? Where are the memorial ceremonies? Why is it being concealed? The survivors of the Native American holocaust have not yet died and already there is a movement afoot to forget what happened.
The destruction of our Native American culture goes further in new forms.
Silence and denial suppress what was happening and what is going on today. Try to find somewhere in the major American media report that. Almost nothing is brought about and certainly not explained.
The survivors represent a tiny fraction of the original number. Also, they symbolize the longstanding American tradition of carnage and malignancy. After centuries of systematic slaughter the Statistical Office estimates at about a quarter million US survivors. And they live in an eternal struggle to make ends meet.
The US is the ideology of Western democracies.
The Government has put everything that the fate of the last free people, not overly aroused the interest of world public.

We have a dream that one day our children and their children to follow may freely practice the religious ceremonies that come from our Creator. We must stand together and fight those, like Resolution Copper, that seek to take our religious freedom, our most human right,” he says in his letter. “If we do not, our beliefs, our spiritual lives, the very foundation of our language, our culture and our belief will no longer be in balance, and we will become undone. If we do not, the taking of one people’s human right threatens all human and religious rights. We’re not giving up on our sacred land. A law can be passed but a law can also be repealed or revised or amended. What was a struggle to protect our most sacred site is now a battle.

You say to me that the land where I live is not sacred land!
But how do you know this?
You tell me that you have consulted the list of special Indian sites
that is kept in Washington DC
and since my piece of land is not on this list, then it is ONLY ordinary land.

But I tell you that this is wrong!!
The land where I worship has been with my people for a long time.
We know it's real meaning ... we know our own ceremonies.
We know what is sacred and what is not!

Do not presume to tell me ... what is sacred in my own culture!
It is not my job - to provide you with a list of my sacred places.
If you would talk to us with respect and humility
Then perhaps we will discuss the truth with you.
But I am not required to explain myself to the outside world.
I am no-one's Redskin"!!

What is sacred to us - has been sacred for centuries ... a long time.
We respect and love the Earth
This does not change with us.
Therefore ... you do NOT have the right to take it away!"