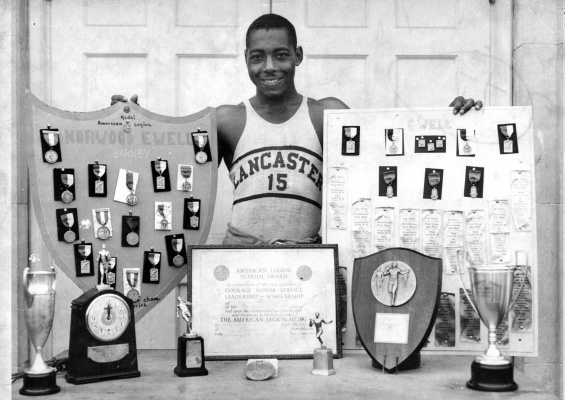 The formal process has begun to give a new name to Lancaster Square, across from Binns Park on North Queen Street. The Barney Ewell Legacy Committee has collected many hundreds of signatures supporting its proposal to name the soon-to-be revamped plaza for Henry Norwood "Barney" Ewell (1918-1996), a McCaskey graduate, World War II veteran, Olympic Gold Medalist, and once the fastest man in the world. If you have not already signed and wish to do so, you may use this web version.

The City’s Request for Proposal seeks a namesake of history which is broadly endorsed, relevant to Lancaster Square, and will unite and always inspire the creative imagination of a diverse and welcoming community. As our forthcoming proposal to the city demonstrates, this same diverse and welcoming community came together after the 1948 Olympics to welcome Barney Ewell’s returning motorcade by pouring onto the sidewalks near Lancaster Square—the place where, years later, it sent him off to witness the 1984 Los Angeles Olympics from the stands with a tribute at the Brunswick Hotel (now known as Hotel Lancaster). Today it unites once again and overwhelmingly supports the idea that the redesigned plaza, striving to inspire creativity and public art, ought to be named for the late Central Market regular and against-all-odds Olympic champion. After all, he proved to future generations that they are not determined solely by their circumstances, but by their gifts they share with the world.