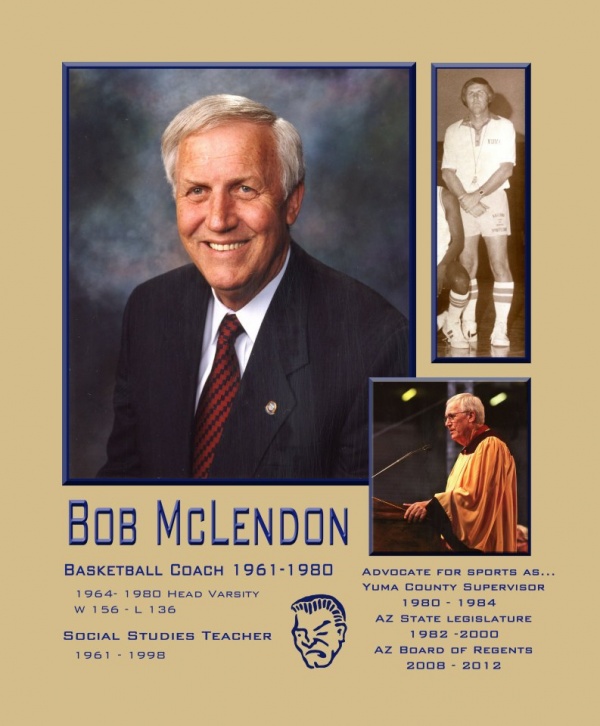 Robert “Bob” McLendon, beloved teacher, coach, colleague and friend passed away at his home on March 9, 2022. Bob McLendon devoted his life to serving the people of Yuma. As a teacher at Yuma High School from 1961 to 1998 Bob taught American History, Social Studies, Physical Education and coached basketball, coaching the YHS Criminal Varsity for 16 years until 1980, the winningest coach in Yuma High School's long history. In 1982 Bob was elected to the Arizona House of Representatives and represented Yuma for the next eighteen years in the State Legislature, always being a strong advocate for students, teachers, public education, healthcare and many other issues critical to the future of Yuma. After serving as the Democratic and House Minority Leader in the Legislature, Bob was elected to the Yuma County Board of Supervisors from 2000 to 2004 and was appointed to the Arizona Board of Regents serving from 2008 to 2012.

Throughout his more than fifty years of service to Yuma and to the State of Arizona, Bob considered his time as a teacher and as a basketball coach at Yuma High School among his greatest accomplishments and fondest memories. He never missed an opportunity to see his former students and players at Yuma High School class reunions and he could always be counted on to be wearing the latest YHS Criminals T-shirt at any event he attended. He will be missed and there could be no more fitting tribute to his memory and to his lifetime of service than to name the basketball court he devoted much of his life to in his name. We the undersigned wholeheartedly support the Yuma High School Hall of Fame Committee's request to name Yuma High School's basketball court in honor and memory of Bob McLendon and we enthusiastically encourage the Yuma Union High School District Governing Board to approve that request.

WE ARE NOT ASKING FOR ANY FINANCIAL CONTRIBUTIONS AND ANY DONATIONS REQUESTED IS IN SUPPORT OF THE WEBSITE HOSTING OUR PETITION.

WE ARE ONLY ASKING FOR YOUR SIGNATURE IN SUPPORT OF THE PETITION.