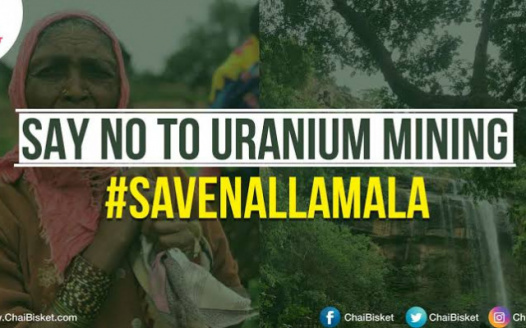 Richness is synonymous with this tiger reserve as it harbours great biodiversity, comprising of around 70 species of mammals, more than 300 hundred avian varieties, 60 species of reptiles and thousands of insects, all supported and nourished by more than 600 different plant species.
Despite the rich wildlife, there is very little human-wildlife conflict. The streams and rivulets drain into the Krishna, which has an amazing diversity of acquatic life including the mugger crocodile, water monitor lizard and turtles. The forest area is pristine and provides numerous ecosystem services like being the major catchment of the Krishna, which quenches the thirst of the two Telugu-speaking states.

The proposed area is hilly and highly undulating. The drilling of 4,000 deep holes will disfigure the reserve, ruining the wildlife habitat. Proposed to cover 20,500 acres, the project seems poised to destroy the ecology of the entire tiger reserve.

The exploration will expose and pollute surface water, ground water and leech the minerals and dangerous chemicals into the Nagarjunasagar dam. The roads will fragment and degrade the dry forests, which may never recover after such a massive exercise. The proposal to mine for uranium in this Eden will not only kill its wild denizens but will also take away the livelihoods of the Chenchu, besides exposing them and hundreds of others to uranium contamination. Is it a bit too much to ask for the rescinding of the proposal? If India's largest tiger reserves are not sacrosanct then the future of tiger is really bleak in the new India we are making. Chenchus are perhaps the first habitants of mainland India.