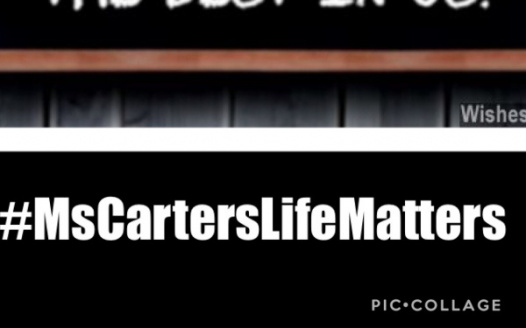 After sharing an impactful lesson on the power of music and how it affects our lives, Mrs.Carter, a teacher at TVMS, was improperly reprimanded after being called to a meeting where the principal alleged that parents and students were offended by the song lyrics used for text analysis. This assignment was an extra credit assignment and was inspired by the students who sing the song and do the dance related to the song at school. Mrs. Carter’s goal was to use learned skills such a text annotation, theme, and tone to unpack the true meaning of the song and how it goes against social movements such as Black Lives Matter & Gun Control, which are both recognized by the student body.

Mrs. Carter has been an invaluable member of the TVMS community, and most 8th grade students would agree that her ability to connect with students on an academic and personal level is admirable. By signing this petition you are declaring that Mrs. Carter is innocent and you would like her position and teacher privileges restored. This petition will be sent to the Howard County Board of Education.