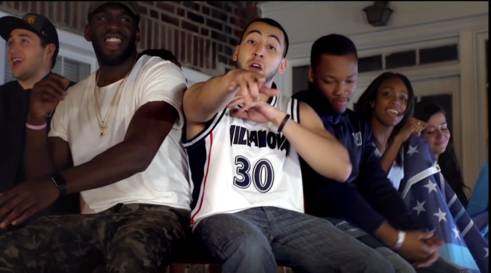 MRG "All The Way Up" at Hoops Mania

228 people have signed this petition. Add your name now!

We all remember where we were on April 4th, 2016. To say that we were able to “witness” history in the making would be an understatement. After 31 long years, our wildcats were able to go “All The Way Up,” and bring home our 2 nd NCAA National Championship Trophy. However, this almost did not come to pass. With 4.7 seconds left, the dream was almost over. Marcus Paige. Literally 100 to 0. But our squad never faltered or gave up hope. They never quit. They always believed…. We all know the rest #ShootemUpSleepIntheStreets

But it’s a new day. A new season. But that memory, that feeling we all felt when Kris Jenkins made not just the greatest shot in Villanova basketball but the greatest shot in March Madness history, will NEVER DIE. Once you’ve tasted greatness, you will never be satisfied with less than excellence. So let the rest of the Big East and the whole NCAA know, the Wildcats are HUNGRY! We finna eat this season. Back to Back. And what better way to start the 2016-2017 season than by starting where we left off…. “ALL THE WAY UP!”

If you bleed white and blue, if you love Villanova, if you call yourself a real Wildcat, sign this petition to get me, MRG, to perform the track that captures the feeling, essence, and energy that defines what it means to be a Villanova Wildcat.