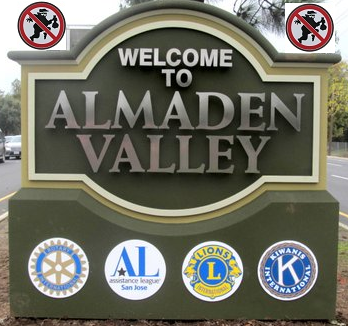 PETITION
To: San Jose City Council and City Staff, Mayor and San Jose Police Department
Almaden Valley Residents Urge San Jose City Council, City Staff, Mayor and San Jose Police Department to relocate Southern Division’s “Community Policing Center” located in Oakridge Community Center, 947 Blossom Hill Road, San Jose, CA. (ground Level Garage A) to a mid-section of District “A” (Adam) for greater effectiveness and visibility. Suggested location near Camden and Almaden Expressway.
By signing this instrument, I agree and represent that I have read, understand and agree with all of the foregoing statements:
1. Increasing number of residents in District “A” have been victims of burglaries. Just in November and December of 2014, there have been approximately 100 reported cases of burglary. The numbers of burglaries in District “A” continues to rise in January of 2015.
2. As a possible solution to the increasing crime in District “A”, we request that the Community Policing Center be moved to a more centralized location. The centralized location will help improve response time within District “A” and increase police presence.
3. Southern Division encompasses approximately 123 square miles. It is the largest of the 4 patrol divisions. As one of the largest of the 4 Districts in Southern Division, District “A” is largely residential area. With its Community Policing Center at the edge of District “A”, visibility of police is scarce in District “A”.
4. Crime rates in District “A” have been increasing due to limited police resources. Therefore, we urge the San Jose City Council, City Staff, Mayor and San Jose Police Department to maximize the efficiency of its resources by relocating the Community Policing Center to the center of Almaden Valley.
Residents of District “A” need your support in making our community a safer place. We thank you for your consideration.
Sincerely,
Residents of Almaden Valley (District 10, Southern Division)