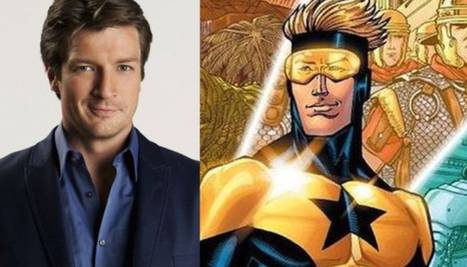 Darkness abounds in the DC Cinematic Universe. Metropolis is in shambles. Aquaman looks like he lost a bet to Dennis Rodman. Gotham is...well its normal, but seriously why does anyone live there? Their one stand up comic is kind of a dick. When he says his show will kill GTFO.

But hope is on its way. The 1970's and 1980's brought to Earth the two greatest forces in geekdom. Nathan Fillion and John Michael Carter (Booster Gold). Today, we learn that Nathan Fillion would love to play Booster. Sure it was just a headline I read but in the age of Facebook, thats all you need.

Lets send Warner Brothers a message. A message that screams WE WANT TO LAUGH, ITS OK TO BREAK UP THE TENSION WITH LEVITY and NATHAN FILLION NEEDS JOB SECURITY.

It's time for Warner Brothers to ask "Where is our Deadpool?" and for us to answer "Screaming in from the 25th century"