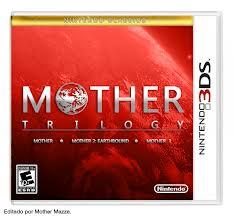 This is important to all current Mother/EarthBound fans and RPG fans that don't like emulators and virtual console, which are the same thing in respect! There are so many fans of each, but Nintendo has only released EarthBound (Mother 2) outside of Japan for SNES but they have done it again for Wii U Virtual Console! We need physical copies of each Mother game individually or as a single game in a bundle, including all 3 titles. Mother 1 (EarthBound Zero), Mother 2 (EarthBound), and Mother 3 (EarthBound 2.) This will Jackpot 3DS and Wii U sales! Itoi said that he isn't making a Mother 4, but we still need localization in this form!

So make a Mother Collection game for both 3DS AND Wii U retail/download only Nintendo! Or make each individual game in English. We need 10 thousands of signatures.

The series is a special, unique RPG. In battles, you get flashy, beautiful backgrounds. The series also has great music. This JRPG is the first ever to not be a medieval-style RPG series. The first series to ever include humor in the games. Yes, this marked a new era for RPGs, all while Final Fantasy, Phantasy Star and more still stay medieval.

So please show your support for a Mother/EarthBound collection game bundle for both 3DS and Wii U in cartridge and disc form!!! We all want this!