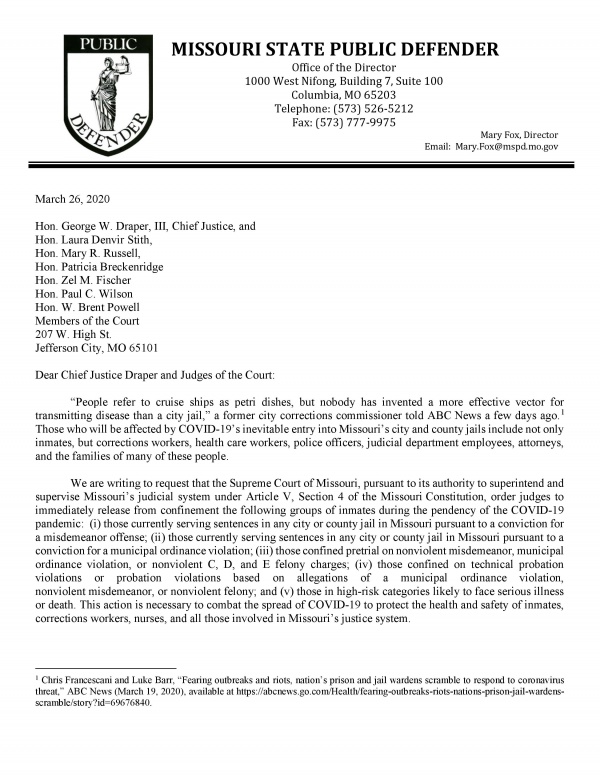 Due to growing concerns of the spread of the Coronavirus, particularly among people who are incarcerated, a coalition of over 30 organizations and medical professionals, sent a letter to the Chief Justice of the Missouri Supreme Court, the Honorable George W. Draper III, outlining the need for decarceration, and requesting the Supreme Court act timely to order the release of people from jails statewide.

The primary letter was enclosed with supporting documents, including a memo written by Dr. Fred Rottnek, Professor and Director of Community Medicine at Saint Louis University School of Medicine, which received broad endorsement from the medical and public health community.

“This letter reflects the broad consensus of concerned individuals and organizations across the state that the current population in Missouri’s jails presents a clear and present danger during this public health crisis. There are people all across the state caged in jails, many of them serving sentences on low-level charges or detained on cash bonds that they cannot afford to pay,” said Blake Strode, Executive Director of ArchCity Defenders. “We feel very strongly that everyone should do their part to significantly reduce the number of people behind bars, and we are hopeful that the Court will agree.”

“Missouri's jails are filled with some of the most vulnerable people in the state, and the reality of incarceration means jails are hot spots for disease even under normal circumstances,” said Mary Fox, Director of the Missouri State Public Defender office. “COVID-19 is unlike anything Missouri has seen, and reductions in the jail population will be necessary in order to avoid significant suffering and death. We are asking the Court to act now, before the inevitable spread of COVID-19 affects potentially hundreds of inmates and their loved ones.”

Citing the Supreme Court’s authority under Article V, Section 4 of the Missouri Constitution, signatories requested judges act immediately to release the following groups of inmates during the pendency of the COVID-19 pandemic:

(i) those currently serving sentences in any city or county jail in Missouri pursuant to a conviction for a misdemeanor offense;

(ii) those currently serving sentences in any city or county jail in Missouri pursuant to a conviction for a municipal ordinance violation;

(v) those in high-risk categories likely to face serious illness or death, such as pregnant women, immunocompromised persons, and those over 60 who pose no threat to the public.

The letter states, “[t]his action is necessary to combat the spread of COVID-19 to protect the health and safety of inmates, corrections workers, nurses, and all those involved in Missouri’s justice system.” Earlier this week, someone inside of a Missouri correctional facility tested positive for the Coronavirus, adding to reports of infected inmates from Rikers Island in New York to Santa Clara County Jail in California. Heeding the lethal nature of the virus, the Supreme Court of New Jersey became the first to order the release of people from state custody.

The letter applauds efforts the Missouri Supreme Court has taken to limit in-person proceedings in the courts and urges the Court to apply such caution among those incarcerated, stating “failure to address the grave risk in our jails threatens to undermine all of the Court’s other efforts to protect public health. It is well within this Court’s authority to correct this injustice and prevent Missouri’s jails from contributing to the present crisis.”

A copy of the letter can be found here.

Due to growing pressure from advocates, 50 people have been released from St. Louis City jails, and St. Louis County officials anticipate the release of 100 people in the near future. Prior to the spread of COVID-19, the City’s Medium Security Institution, aka ‘The Workhouse’, has been subject to scrutiny and litigation. In November 2017, ArchCity Defenders filed a federal lawsuit alleging inhumane conditions and inadequate access to medical care, and in Spring 2018, a campaign to Close the Workhouse began to organize broad support to permanently shutter the jail. In January 2020, the campaign published its second report and City officials announced a resolution to defund the Workhouse in FY 2021.

Signatories enclosed background materials regarding disease transmission in detention facilities, correspondence from medical and public health professionals, and other local efforts at reducing the incarcerated population. Those documents can be found online here.

The proposed Supreme Court Order re: Release of Inmates because of COVID-19 can be found here.

This letter represents a continuation of advocacy efforts organized by ArchCity Defenders and supported by statewide stakeholders, calling on public officials to act on behalf of people who are at great risk of contracting and dying from the Coronavirus. A link to that letter can be found online here.

The primary letter sent to Chief Justice Draper was endorsed by:

Heartland Center for Jobs and Freedom