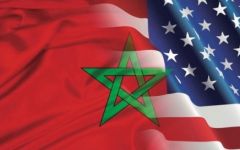 We are writing in reference to a letter sent to your office on February 17, 2021 signed by 27 US senators, related to the Moroccan Sahara issue.

As American Moroccan members of the Washington Moroccan American Club, we have full confidence in your wise judgements and well thought decisions.

We are asking you to take in consideration the motives of such a move from some members of the senate which we find unhelpful.

As American Moroccans we hold deep love and respect to our country of origin as well as to our great nation the United States of America.

Reversing the US recognition of Moroccan sovereignty of the Sahara will only hurt us and undermine the historical ties that unite Morocco and the United States.

Such a decision will lead to the voices of violence and separation to grow stronger in the region.

We know, Mr. President, the extent of your belief and conviction in the role of peace and negotiations, and we also know that the autonomy solution under Moroccan sovereignty proposed by Morocco enjoys international support.

The Moroccan Sahara is considered the gateway to Africa for development, prosperity and the fight against extremism, all of which are in our interest as Americans and Moroccans who still have family and historical ties that cannot be erased.