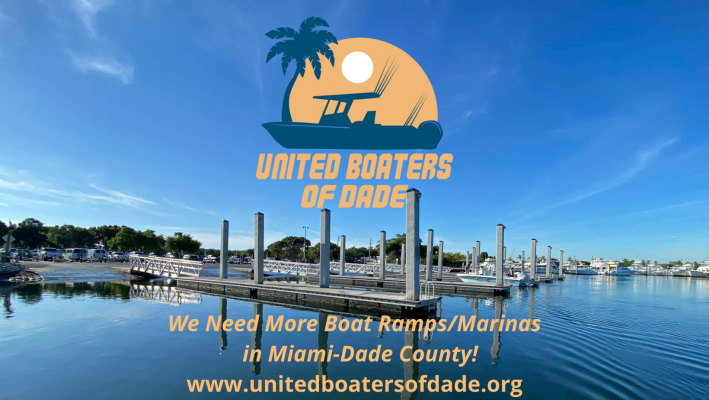 Miami is known all around the world for its boating, fishing and water recreation lifestyle. The Boating Community of Miami-Dade County is in the midst of a infrastructure crisis! The County has not built any new boat ramps/marinas or expanded any boat ramps/marinas since the 1970's when Blackpoint Marina was built. Since the 1970's, the amount of registered boats have nearly tripled and the lines have been getting longer and boat ramps have been closing earlier! Currently there are over 75,000 registered boats in Miami-Dade County and only 1,700 spots for vehicle/trailer parking at the public boat ramps.

Tax paying boaters are looking forward to spending the day on the water with friends and family to only get turned away from the high demand of County boat ramps! Often times on the weekends boat ramps are reaching capacity and closing before 10am! Boaters are faced with a county employee or police blocking off the ramp access saying that the ramp is closed! This leads to boaters wasting hundreds of dollars on food, ice, beverages, fuel and other items to only get turned away at the ramps! There are numerous stories on the United Boaters of Dade's Facebook Group of the boat ramps closing at 8am before summer school break has even begun! Public Marina access is just as bad and if not even worse than the boat ramp crisis. The list is a several year wait to get your boat in a wet slip or dry storage! Then, when you finally get your turn you need to pay an astronomical price to have your boat there.

The United Boaters of Dade is dedicated to raising awareness about this boating infrastructure crisis with the intention of engaging our local elected officials to do something about this issue! These elected officials continue to cater to wealthy citizens and communities surrounding existing ramps that don't want the increased traffic from boat ramps in the area so the elected officials limit access to only kayaks or paddleboards to limit noise and congestion in these communities! Often times, these communities were built DECADES after the boat ramps we built! Elected Officials recently forfeited grant money from the State of Florida that was given for the renovations of a boat ramp but they catered to the wealthy residents and restricted motor boat traffic!

Please sign the petition to show our Elected Officials that we mean business and that if they can't do the job then we need to get those in office who can!

The United Boaters of Dade are here to tell Miami-Dade County Elected Officials that: WE BOAT AND WE VOTE!