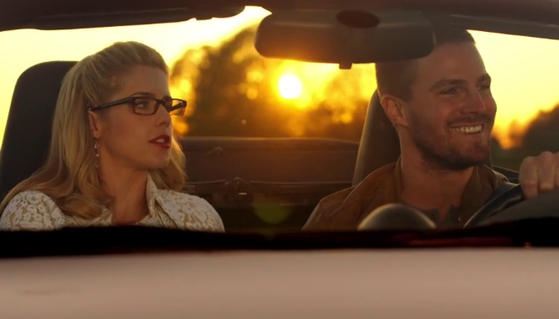 "My Name Is Oliver Queen" freed both characters from the contrivances that kept them apart and allowed the natural chemistry between Oliver and Felicity to carry the plot. Finally, this was the couple that so many fans had been rooting for since the discovery of their dynamic. This was the friendship that had grown into something more before either of them knew what was happening. This was the romance that opened up Felicity's heart in a way that she hadn't known was possible and rendered former playboy Oliver Queen celibate and monogamous even when there was no hope for them to be together. This was the Oliver and Felicity of days past, and it was gorgeous
Despite Oliver's swoonworthy speech and Felicity's spectacular save, the interaction of "My Name Is Oliver Queen" that condensed every aspect of the Oliver/Felicity dynamic into a single scene was when Felicity broke her rule about bringing Oliver coffee. After a gentle nudge that they should talk about his most recent suicide mission, Oliver's admission about his recurring dream of running away with her brings a sort of tragic beauty to the situation. Quite aside from the slightly hilarious gag that Oliver's wildest dreams about his lady love continue to be chaste even after their love den interlude in Nanda Parbat, his unrestrained wistfulness about the life that they could never have together summoned a side of him rarely seen. His expression as she instructed him to fight to live rather than to die was so sad and so sweet and so unguarded that Arrow has truly passed the point of no return with regard to Oliver's string of women. Whether this is by design in the aftermath of the failed epic romance of Oliver and Laurel or because Stephen Amell's special swoony gaze reserved just for her forced producers' hands, the classic romantic beats given to Felicity have marked her as the romantic partner for Oliver Queen