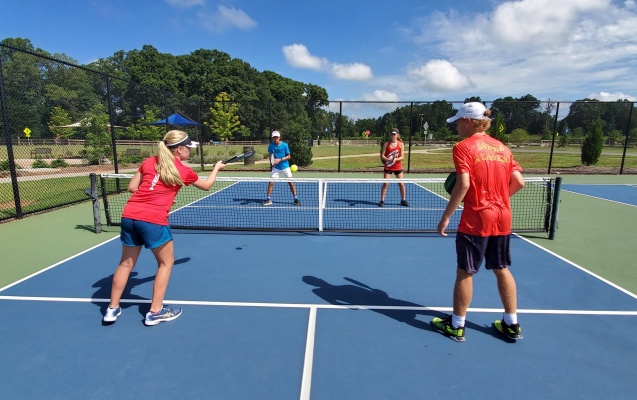 As you know, pickleball is one of the fastest growing sports in the country. This rapid growth has created a heavy demand for indoor and outdoor courts. In Mooresville, overcrowding of available indoor courts was seen prepandemic at all three indoor facilities with 30-40 players showing up for play on 3 courts. Unfortunately, indoor play hours have decreased for this Fall/Winter season. Play outdoors, on courts using tennis courts with pickleball lines, has caused Mooresville pickleball players to play on dedicated courts in adjacent towns. That’s because tennis & pickleball are competing for the same 2 courts at each Park location. We are asking Mooresville Parks and Recreation to address these issues, both indoor & outdoor, to improve the opportunities for playing pickleball in Mooresville.

The Mooresville Recreation Department currently has seven tennis courts with pickleball lines. There are 18 public tennis courts in their system, but no dedicated pickleball courts. Playing pickleball over tennis nets means: 1) The net is always too high approaching each side line, 2) certain shots, ATPs and Ernes, are not possible, 3) drop shots and crosscourt dinks are hindered by the net being 10’ longer on each end.

In signing this petition, I am confirming that I feel dedicated pickleball courts are important and should be a priority. I am requesting that Mooresville Parks and Recreation work with our Pickleball Ambassadors and other interested community members to address the indicated need for 1) dedicated outdoor pickleball courts, and 2) providing more indoor hours, including evening hours.

Please consider joining the "Iredell County Pickleball....0-0 Start!" Facebook group. Here we will keep everyone informed about our progress in case you wish to participate. Thank you for your consideration.