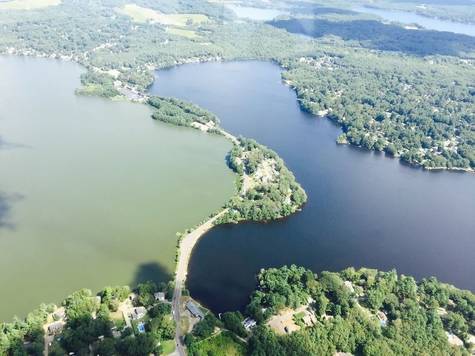 Sponsored by the Monponsett Watershed Association

For many years Monponsett Pond has been afflicted with high concentrations of blue green algae, also known as cyanobacteria, which can reach toxic levels. In 2015 the Massachusetts Department of Public Health (MDPH) tested the west basin of Monponsett Pond for 175 days (June - November) and a public health advisory was issued for 133 of those days due to high levels of cyanobacteria. Previously public health authorities warned that physical contact with with water containing high levels of cyanobacteria produce toxins that can cause skin rashes, gastric distress and/or respiratory problems. Now scientific research is showing that in lakes and ponds with high concentrations of cyanobacteria the toxins can become airborne, exposing people miles away who have had no physical contact with the water. Most disturbingly the research suggests a correlation between these toxins and devastating afflictions such as amyotrophic lateral sclerosis (ALS), also known as Lou Gehrig’s disease, and Alzheimer’s.1,2

Monponsett Pond is an important natural resource in the Southeast region: it is a major recreational area, a supplemental drinking water supply for the City of Brockton, and home to several endangered species. The contamination of Monponsett Pond not only endangers the public health and the environmental health, it also has a negative effect on property values and the economy in the region.

In September 2015 over six hundred concerned citizens sent a petition to Governor Baker asking for his help in improving the water quality in Monponsett Pond. Aside from some inconclusive meetings with the Massachusetts Department of Environmental Protection (MassDEP) there has been little response from state government. Consequently, the undersigned once again urge our state government to take meaningful action to reduce the threat posed to the community by the contamination of Monponsett Pond. We ask that state government:

2) Pay for in lake treatments to reduce the cyanobacteria