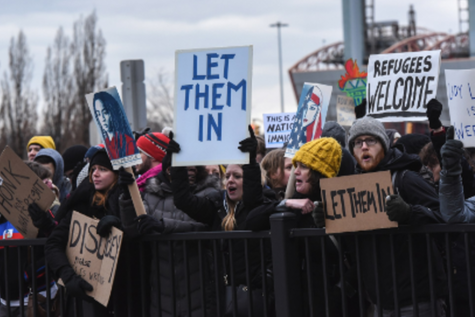 Modify the Ban? Yes We Can!

Modify the ban on Muslims? Sounds ridiculous, we know. However, we have a very reasonable plan for the matter.

First of all, instead of 120 days, refugees should be banned for 60 days because they are in need of a place to live. The countries that these refugees are from are not suitable places to live, and we should help these people out. After all, we don’t want to have bad relations with these countries.

Second, descendants from these countries should be banned for only 30 days because they haven't done anything wrong, it's only a small group of people that are trying to hurt the citizens of America. A ban for one month is reasonable because it gives us Americans enough time to settle down, relax, and figure out what to do about ISIS. Although, after the 30 days, descendants from those countries should be watched more carefully and checked by security more often for safety. If they are found to be innocent people, they should be let into the country. America is a free country, and some people have never experienced that. Just because they are from a country that is near one of our enemies, that doesn’t mean that we should completely block them out.

Third, people with work/student/travel visas should be allowed to enter America no matter where they are from. Acquiring a visa can be a long process, so it should act as a safety measure when letting people enter the U.S. Also, studying abroad is a wonderful way to experience new cultures and ideas, and it isn’t right for us American citizens to be doing it while other people from different countries cannot.

Lastly, the indefinite ban on Syrian refugees should remain, especially because of the current disputes between us.

Thank you very much for taking the time to read this letter, and please enter your signature below if you would like to support our cause!