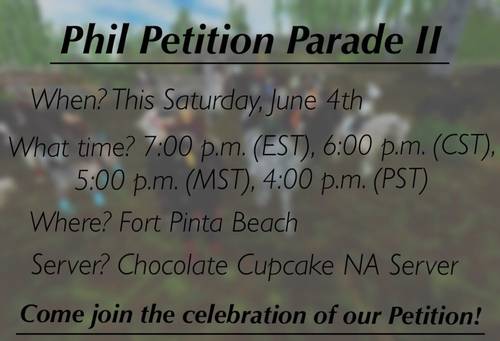 Have you ever been affected by Phil? Has Phil stolen your freedom of speech as well? Hello, my name is Lily Sunhill, and I have created this Petition to encourage Star Stable Online to modify their Chat Filter on the North American Servers. Have you noticed how in countless other countries, including Sweden, England, and France, the filter of the chat has been created to only discourage bad behavior and NOT exclude necessary words to communicate?

On these North American Servers we cannot say the following words, yet they are important to communicating through our language: Meet me at, all NUMBERS, came, hate, our CHARACTERS' last names, DAYS OF THE WEEK, MONTHS, canter, colt, pair, pants, heating, reared, couple, different LANGUAGES (whereas other servers can speak in English, we can't speak, for example French?), beans, playing, hard, service, jumps, excited, ICE CREAM (for real though), disgusting, rude, hot, juice, fruits, cantering, bones, below, behind, taste, desire and the list continues in magnitude.

For reasons of safety and Internet misconduct, ALL players can understand that that is in the business's right to keep us safe, even though when we agreed to the 'Terms Of Use' policy when creating our accounts, we cooperated with the understanding that we were not to misuse our chat system. Most players of the NA Servers do not abuse the chat system to say the things that SHOULD be blocked anyways. I guarantee all Star Stable Players of the NA Servers would agree with me when I say that we are requesting a MODIFICATION to the Chat Filter to meet our language desires but also maintain its safety. Star Stable Online is a game I have been playing for about two years now and I have experienced so much change throughout my time playing, but this change would be an incredible improvement to the game, as well as making it more enjoyable to players.