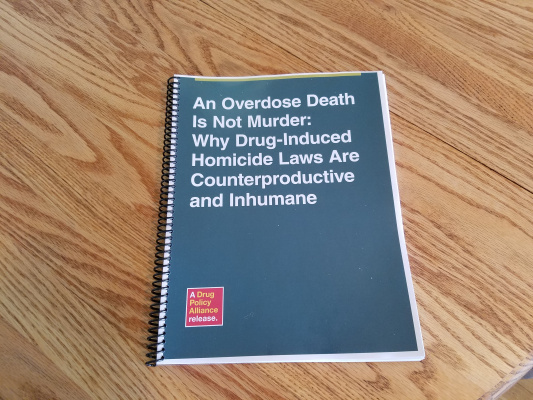 The MISFIRE Commission is a volunteer effort to revolutionize the way America responds to alcohol and drug addiction. Amid other causes, we stand together to challenge elements of the media, medical, and criminal justice systems that routinely prey upon individuals suffering from substance use disorders.

This petition collects signatures acknowledging and endorsing the following letter addressed to Crawford County Prosecutor Kent Howald. The letter is written in defense of three young people who have been arrested and charged in connection with the fatal overdose of Alexandra Balling. While this commission is deeply saddened by the tragic loss of Alexandra Balling, we do not find justice in the prosecution of Cameron Frazier, Nicholas Kunz, or Andrea Harrelson in connection with Alex's untimely passing.

Citizens of Missouri should sign this petition in support of the following letter to Prosecutor Kent Howald. This letter, along with supporting documentation, will be packaged and delivered to Mr. Howald on Monday, December 4, 2017.

We write to you today regarding the tragic overdose death of Alexandra Balling. It is public knowledge that your office has assumed multiple felony charges, including murder, against individuals within proximity to Alex’s passing. Based upon information and testimony collected and reviewed by this commission, we find ourselves compelled to disagree and stand against the prosecution of felony charges in response to Alex’s death.

This commission is fully aware of Franklin County Prosecutor Robert Parks 2017 murder indictments in response to the overdose fatality of Joseph Garrett. Park’s malicious discretion, coupled with inaccurate, libelous, and inflammatory media coverage, created a worst case public safety risk that this commission, and The People of Missouri, vehemently condemned.

It is the opinion of the undersigned that Park’s felony murder fiasco, coupled with the media publication of your Balling prosecutions, are contributing factors in the November 4th abandonment of an overdose fatality in Gray Summit, MO. This Commission publicly criticized the Balling and Garrett murder charges in warning of the adverse message impressed upon citizens swept into the current heroin epidemic. Within days of your felony murder announcements, the nearby Gray Summit overdose abandonment became the year’s most prolific and heartbreaking example of failed prosecutorial tactics. This commission cannot, and will not, affiliate coincidence with these events.

We have packaged and provided an extensive, groundbreaking report regarding the public health liabilities and ramifications of drug induced homicide prosecutions. This document, coupled with the 2016 Surgeon General’s Report, will serve as the foundation upon which this commission, and its' supporters, publicly advocate and pursue the Nolle Prosequi of all felony charges currently burdened upon Cameron Frazier, Andrea Harrelson, and Nicholas Kunz.

We look forward to your prompt and agreeable response.