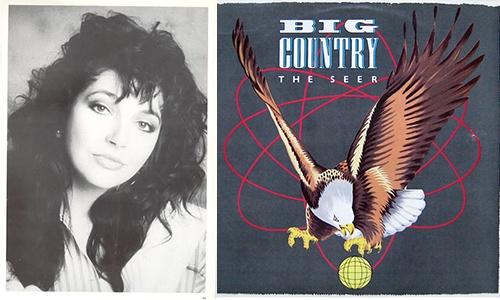 Help Release the Robin Millar mix of "The Seer" by Big Country!

A plea to Universal and Chrysalis: Release the Robin Millar mix of "The Seer" by Big Country!

In 1986, Big Country released their third album, "The Seer," the followup to previous classics "The Crossing" and "Steeltown." This triumvirate is considered by many to be the "Holy Trinity" of the band's impressive catalog, and "The Seer" in particular is filled with some of the band's most cherished songs.

"The Seer" was produced by the legendary Robin Millar and featured the band's biggest hit ever in "Look Away." Interestingly, the single mix of that song is the ONLY track from Millar's original mixes to ever be released. The rest were shelved at the eleventh hour as part of an effort to make the album sound more "in step" with the time period in which it was created.

Enter Walter Turbitt, who remixed the entire project, taking Millar's organic, warm and bursting-with-life mix and diluting the emotional impact of the performances with the addition of effects and production techniques that, while popular at the time, now sound dated.

More upsetting, Turbitt took perhaps the highlight of the album, a performance from the iconic Kate Bush on the title track, and minimized her presence considerably from Millar's original mix. What was originally recorded as a powerhouse duet between Bush and Stuart Adamson — the same approach taken on Bush's legendary contribution to "Don't Give Up" with Peter Gabriel — now saw Bush inexplicably relegated to a role more closely resembling that of a backup singer.

Turbitt also remixed "Look Away" for the album, and a side-by-side comparison of his take on the song vs. Millar's take on the single release highlights what could have been. Millar presented the band in its purest form, sounding live, vibrant and timeless. In fact, in a 2013 interview, Millar described his approach to the album this way:

"The intention, 9 months before the release of 'The Joshua Tree,' was to move into the area of simple realism, letting the drama and emotion of the song, the lyric and the performance - and the musicianship - replace the drama of digital 80s reverb."

That's the version of "The Seer" Big Country fans are desperate to hear.

But great songs are still great songs. The album was released with the Turbitt mixes, and the fans embraced it, as they still do.

But once fans discovered that another mix might exist, the Millar mix, one where EVERY song on the album was presented in the aurally superior manner of the "Look Away" single mix, it became apparent that the "Holy Trinity" was in fact hiding a "holy grail."

The Seer" has already been remastered and re-released on more than one occasion, but a release of the COVETED Robin Millar mix of the entire album — or even a NEW mix conducted by Robin Millar — would be like getting an entirely new album. It would be a MILESTONE EVENT for Big Country fans, one that we would happily purchase, despite the copies of the album we already own.

In fact, Big Country fans wouldn't be alone in their interest. Kate Bush fans are just as obsessive and completist about her work, and the prospect of an unearthed version of her performance with Adamson, one that features her MORE prominently than the original, would no doubt encourage them to buy this release as well, especially during a time when buzz about Kate is building after her first tour in decade.

We, the undersigned, respectfully ask Universal and any other connected parties to release what we believe would be the SUPERIOR version of a classic album the way it was originally meant to be heard. We want to see released — we want to PURCHASE — "The Seer" by Big Country, produced AND MIXED by Robin Millar.

The music deserves it.

The fans deserve it.

The very time/space continuum deserves it. (At least I assume it does.)

Thank you for your consideration of this heartfelt request by one of the most loyal fan bases you'll ever encounter.

UPDATE: Since this petition went live a few years ago, it's experienced its fair share of ups and downs, and there was a time when it seemed as if this was indeed a "lost cause." However, we've recently learned that Robin Millar himself has offered to remix the album AGAIN, in 2021, and release it on the label he co-owns: Chrysalis Records! Universal, to the best of our knowledge, is open to licensing the original multi-track tapes to Robin for this very purpose, as apparently his original mix cannot be found. This is as close as we've ever been to FINALLY getting this 30-plus-year-old wrong righted! Your signature can help drive the point home that there is demand for this album and could finally put this effort over the top, from "lost cause" to "dream fulfilled!" Please, whether you're a Big Country fan, a Kate Bush fan, both, or just a fan of lost causes and lover of music as it was meant to be heard (not watered down by the suits), sign this petition!