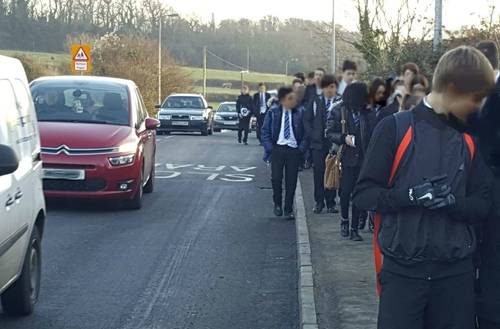 My name is Huw Powell and I am the Head of Mary Immaculate High School on the western side of Cardiff. As a school we have real concern about the safety of our students who walk or cycle into school. We are a growing school with currently 750 on roll, rising to nearly 800 in September 2017. Around a third of our pupils come by bus from areas such as Grangetown, Canton and Riverside. The vast majority of the two thirds of our pupils walk to school and have to negotiate Caerau Lane to do so. Currently Caerau Lane only has one footpath that runs the length of Caerau Lane down to Heol Trelai, which means all of our students who walk home need to fit onto the one footpath making it congested and dangerous.

Over two years ago I complained to Cardiff Council about the insufficient provision of pavements and crossing for this large group of pupils. Caerau Lane is a very busy road with fast traffic and multiple junctions. Over 400 pupils have to walk along a narrow strip of pavement from the school and then try to cross this busy road without formal crossings, crossing guards or even road markings to assist them. Pupils have found themselves having to walk on grass verges or even on the road itself to be able to negotiate going home from school.

In July 2015 an assessment was undertaken by Cardiff Council who acknowledged it was an issue but because no child had been injured, they felt it was not a financial priority. Again we complained to the Council in September 2016 where they visited us. Again the same findings were found, that there is an issue but no child had been hurt. I feel this is a regrettable decision, one that is borne of money not the safety of young people. Given this I am asking for your support. As a School we have real concerns over the safety of children walking home and feel we need to act now before a serious accident occurs.

Today we are launching a petition, asking Cardiff City Council Transport and Planning department to revisit their decision and improve the road safety for our pupils. As a school we have spoken to pupils and parents alike and believe to make the road safe we need an additional pavement on Caerau Lane which will allow pupils to travel safely down both sides of the road. In addition a designated cycle route needs to be clearly marked, ensuring our students who ride to school are safe in doing so. We also feel there is the need to re-paint and increase the amount of yellow lines outside our school and increase the amount of road safety signage. Finally an additional zebra crossing is needed at the top of Caerau Lane allowing pupils to cross safely near the mini roundabout.

I would ask if you can please add your names and details to this; we intend to put this petition to the local Council and the local press in due course. We also have the support of local Councillors as well as our local MP and AM in regard to this matter. I thank you in advance of your support of this worthwhile matter.