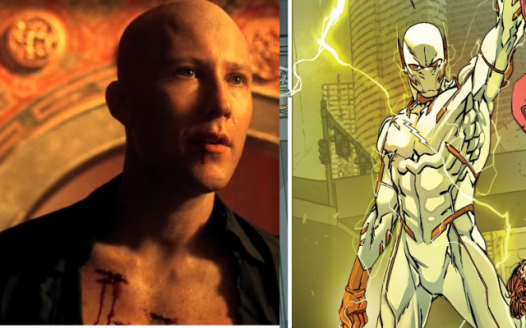 Since Jessica Queller carelessly cast Jon Cryer for Lex Luthor instead of Michael Rosenbaum behind our backs, we'll have to get Todd Helbing to consider casting Smallville's Lex Luthor himself for Godspeed since he was the voice of Flash from Justice League 2001. Now this is what CW should do when they bring him in for a future season of the Flash;

*He is to be male as August Heart just like in the comics and NOT anybody else because the Flash series is not a 'Guess and Game' show!

*He unlike the comics is not to be a part of Team Flash's inner circle because that has gotten old since Eobard and Hunter played cherades as members of the team.

*The only twists and revelations CW can hold out from revealing in the first half which they shall reveal in the second half of a future season are Godspeed's endgame, his purpose, and more details on his origin including what he is capable of with his abilities.

*If Godspeed kills off any major characters on the Flash besides Fast Track, it should be Joe, Cisco, or Caitlin because with the producers of the CW need to stop holding onto everything they have since the very beginning of the show and they must consider straightening up since they wouldn't have Cicada kill Cisco off in S5 episode 3 as the title said all because of how corrupt Producer Todd Helbing became with not letting go of his twist and turns mischief making the episode title a lie just to complete some worthless phrase out of the first 2 episodes

*For an epic final battle against Godspeed, Wally (and maybe Barry if CW does bring him back super early out of the speed force) should team up with the Green Arrow, Ronnie Raymond/Firestorm of Earth 3 and Siobhan Smythe/Silver Banshee of Earth 38 to defeat the villain. No casualties.

*Cisco acted arrogant bringing Barry back from the Speedforce without precaution but with the quantum sphere destroyed, the team is to defeat Godspeed the same way he defeated Savitar in the comics by throwing him into the speed force

then sign the petition if you are with me on this article!