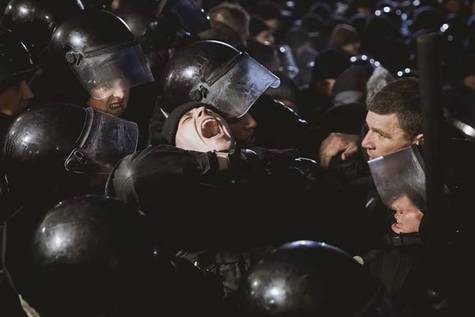 1040 people have signed this petition. Add your name now!

Pedro AGRAMUNT, President of the Parliamentary Assembly of the Council of Europe

Thorbjørn Jagland, Secretary General of the Council of Europe

Heads of the diplomatic missions, accredited in Chisinau

Few days ago, Publika TV, one of TV channels owned by the only Moldovan oligarch Vladimir Plahotniuc, has initiated an attack on Pirkka Tapiola, the Head of EU Delegation in Moldova. Launched just days after the EU Delegation has released a ”Local statement on Human Rights”, condemning authorities’ antidemocratic practices of persecution of opposition, lawyers and human rights defenders. This attack is a direct consequence of the degradation of democracy in Moldova and we would like to condemn this attack and express our disapproval of such practices, which are seen all too often in the local politically controlled media.

Through this message we would like to first-handedly address Your excellences and to express our deep concern regarding the direction our country is being taken to in the last period. These elections only aggravated the so-called “stability” acclaimed by the authorities. The same period coincides with the last touches in the construction of a captured state – a creature of Vlad Plahotniuc, de facto ruler of the country with an unconstitutional title of “coordinator of parliamentary majority”.

We believe the elections that took place on November 13 seriously exacerbated the situation, and the actions undertaken by the authorities immediately after these elections speak for themselves. The rapid appointment of the new Prosecutor General, in conditions of lack of transparency and public scrutiny has the intention to keep this institution under Plahotniuc’s personal control. We do not believe this Prosecutor General will curb high-level corruption.

The initiative to subordinate the Information and Security Service to the Plahotniuc-controlled Parliament majority is another example of opportunistic move to maintain the grip on the institutions, that are supposed to act in the national interest.

The heads of the above mentioned authorities, and many others, are not loyal to the people of Moldova, they are loyal to the person that has appointed them. They are not obeying the Law, they are obeying his direct orders, often in full disregard of the Law. Moreover, he also has control of those who make the Law.

The country’s fragile democracy, its values and institutions, are being crushed on a daily basis and the grip on power is being tightened day by day. While there are many to be held accountable, there is one person that is in top of this list – Vlad Plahotniuc.

Year by year, we, the country lose time, while the oligarch and his accomplices get richer. It is true that this government has unblocked external financing (which would not have been blocked if not for their corrupt practices from before, including the “theft of the century”, which is not investigated so far), but their biggest success remains the time, gained for their “coordinator” - Plahotniuc.

It was obvious that once the ”vertical of power” was constructed, the next logical step would be silencing the voice of the opposition. This process cannot happen without curbing the basic freedoms, such as the freedom of speech and the freedom of expression. People who criticize this government are being ”eliminated” from the public space. We see weekly media attacks from Plahotniuc’s media holding, bloggers and internet trolls aimed at publicly destroying anyone with an opposing, inconvenient opinion. They intimidate and discourage people to speak freely and hamper public opinion from taking its natural shape responding to corruption this government is breeding.

It is unacceptable that, while Plahotniuc’s mass media treats free speech as a license to lie, the state institutions subordinated to him are doing everything in their power to impede any opposing opinion, creating all the conditions for the free media to die slowly.

There are NGO’s that were some time ago credible and active, and are now under Plahotniuc’s thumb often justifying the abuses committed by the present authorities, or simply staying quiet about them, which is the same thing. With consistent steps, permanent abuse of power and violation of the laws which should govern the institutions, he has succeeded to destroy, bribe or corrupt most of the civil society, which is inexistent and paralyzed at the moment.

It is our understanding that Plahotniuc’s ultimate goal, while silencing any opposition voices, is to create the perception that there is “no alternative to the present authorities”– an argument that has been and will be brought to you in official meetings. With his financial and administrative capacity, Plahotniuc can destroy any signs of opposition for decades to come. All he needs from the international community is their neutrality and acquiescence, and all he needs from the people inside the country is silence.

The list of people who are suffering from this state of affairs is already long. People are being threatened, discredited, blackmailed, and persecuted in order to be reduced to silence. The situation has worsened to such an extent that even the representatives of diplomatic corpse become the targets of these attacks. Intimidation of an EU representative to Moldova goes beyond all possible “red lines”.

If that is how Plahotniuc’s mass media speaks about an EU diplomat, one can only imagine the ”treatment” a local critical voice can see from the same propaganda machine. If we do not act now, things can only get worse.

We believe, Mr Tapiola’s impartial attitude towards the authorities, who have discredited Europe, is an important factor for restoring the confidence of our society in true European values.

We would like to vehemently condemn this attempt to discredit an EU diplomat for standing by the obvious thing – charity made from stolen money is not a real charity.

This case is an illustration of what corrupt mass media can do to anyone, if they will continue to act in the atmosphere of total impunity. Under these conditions, no real opposition will ever grow.

We call upon your excellences to support our message for the sake of democracy in which we strongly believe. For the sake of protection of fundamental human rights and freedoms: freedom of speech, freedom of association and others – all being under great threat in Moldova today.

We call upon the EU institutions to condition the assistance and to demand the implementation of real reform that will liberate the state institutions from the illegal grip under which they are at the moment.

Our voice is growing stronger and we will not remain silent. But your voices need also to be heard in Moldova. Blunt, firm and uncompromising positions taken by our European partners on what is happening in our country are critically important for the Moldovan democracy, and for the European future of Moldova.