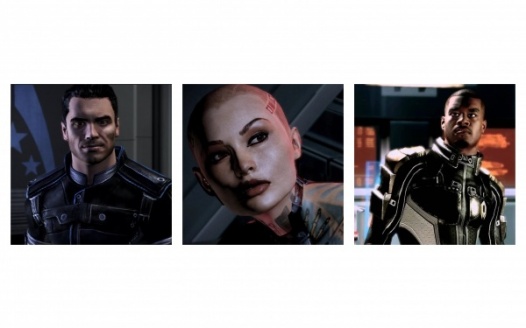 When we first wrote this petition in February/March 2021, it was in anticipation of the Legendary Edition's release and based on several news reports that had dropped in January and February. Now that the game is out and we have new information on the existing material for the trilogy's unfinished same-sex romances options, we've expanded our asks. It's since come to our attention that in addition to Kaidan's unfinished ME1 romance with Male Shepard and the cut ME2 romances for Female Shepard and Jack as well as Male Shepard and Jacob, material also exists for same-sex romances with Ashley Williams, Tali'Zorah, Miranda Lawson, and Thane Krios. These have all been discovered and explained in detail by a group of dedicated modders who have been working on restoring these romances for years. They've also recommended placing the characters in tiers based on how easily their romances can be finished and added in post-release patches - the top two being Kaidan Alenko and Ashley Williams.

So as not to invalidate or disrupt this petition, which contains many comments asking about these other four characters, we're keeping it as-is instead of starting another which could confuse fans and signers.

To further explain why these changes have occurred, we'd like to direct you to three documents:

2.) A technical write-up explaining which characters have the most useable material and how the studios can finish and integrate them with minimal effort; and,

3.) A response to a recent interview from Project Director Mac Walters in which he gave typical EA/BioWare-approved non-answers which are fundamentally inadequate and demonstrate the studios' clear disinterest in doing better with queer representation.

In light of this new information, our movement is evolving. We've teamed up with key members in the Make Jaal Bi movement from back when Mass Effect: Andromeda was released without a male same-sex squadmate romance option. The studios proved they can do better with queer representation when they added his relationship in post-release patches - which is exactly what we're asking them to repeat now. Our partners include @magic_robins and @dgcatanisiri on Twitter, and our main tag is #MakeMELEInclusive. Magic_Robins created a Master Post on Tumblr which also contains the entirety of these documents and further explanation of these changes.

At this point now that the game has dropped and Pride Month has begun, it's crucial that y'all Tweet and share all of this with Mac Walters (Project Director) and Jay Ingram (BioWare Community Manager) as they're the ones who have the most power in this situation to sway their executive leadership to listen to our concerns. But they won't know about any of this unless we all tell them.

So keep pushing. Keep making noise. The studios have done better before, and we believe they can now. In the meantime, stay strong and clear.

We the initial signers are an LGBTcrew of avid sci-fi fans who have connected across social media platforms over our mutual love for the Mass Effect universe. The last four months have been a rollercoaster for us. Growing excitement over the rumors of the Legendary Edition turned to joy at its announcement and then dismay when it became clear there would be no update or improvement to the lacking same-sex romance options. This sadness turned to anger and distrust in January when news broke that Jack and Jacob also had planned same-sex romances which were ultimately cut from ME2 [Source 1; Source 2]. And that distrust only grew when various reports gave contradictory reasons for why this happened [Source 3]. Finally, when fuller details emerged in February about the extent of the work being done on ME1 led to questions about including Kaidan’s same-sex romance, we got more excuses about his romance never being planned - despite already known evidence to the contrary in the form of unused dialogue and animations left behind in the game’s code [Source 4].

Given the numerous reports and contradictory information coming from the studios and developers over the last few months regarding ME’s same-sex romance options, we are asking for:

For the following reasons:

It is our hope that BioWare and EA will give serious consideration to addressing these concerns in your endeavor to revamp interest in the Mass Effect universe. We recognize that these games have helped make strides in LGBTQIA+ representation easier, and we are now asking the studios to do better as a show of good faith in anticipation of future projects.

And to our fellow LGBTcrewmates, supporters and allies, thank you for signing! We will update you as the situation changes.