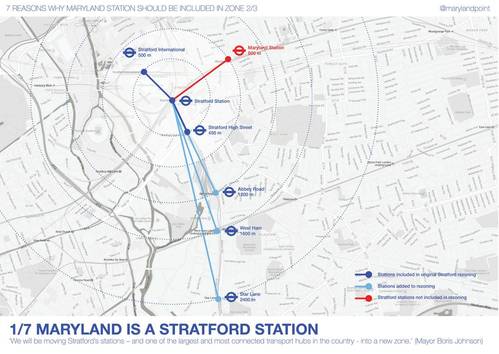 665 people have signed this petition. Add your name now!

Maryland was the only station in the Stratford area not to be re-zoned to 2/3 in January, meaning residents, many of whom are on low incomes, could end up paying over £200 more this year to use their local station compared to those living elsewhere in the area.

Newham continues to be one of the most deprived areas of the country with household incomes among the lowest in London and while the 100,000 weekly users of the eight re-zoned stations in the Stratford and Newtown ward now benefit from cheaper travel, those living in Maryland do not. We believe this is unfair and we are asking the Mayor and Commissioner of TfL to include Maryland station in zone 2/3.

As a major transport hub Stratford station can get dangerously busy at peak times and with future residential and commercial development, including the exciting Olympicopolis scheme, set to bring thousands more people to the area the problem of overcrowding will only get worse. Maryland station is less than 10 minutes walk from Stratford meaning it can help reduce these issues. However, it will only do so if it offers a cost-effective alternative for anyone living and working in the east side of Stratford and also those who currently alight at Stratford to continue their journey by bus and avoid the higher fare, resulting in a transfer of higher passenger numbers from one mode of transport to another out of the same station.

A station on the eagerly anticipated ‘Elizabeth Line’, Maryland will soon benefit from a £3m ‘facelift’ as part of Crossrail works, improving the station and its surroundings while helping give a much-needed boost to the regeneration of the area. To capitalise on this, residents and businesses must be able to use the station and cheaper zone 2/3 fares should help boost passenger numbers, offsetting potentially reduced TfL revenue, which in itself would be a very small part of the overall re-zoning initiative.

Lyn Brown MP has already given her support and we are looking to Newham Council to include this as one of their priorities in 2016/17. We have also written to the London Mayoral and the City and East London Assembly candidates for their backing.

By supporting this petition you are helping the hard working individuals, families and businesses who want to use their local station without being penalised for doing so.

You can find our community Facebook group here: http://tiny.cc/me15