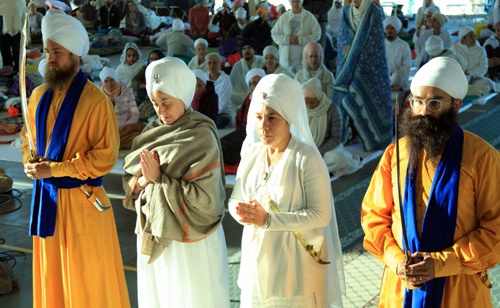 In light of the Hukamnama issued by the Akal Takht on January 1, 2005, that specifically prohibits same sex marriage, we believe that approval of same sex marriage without significant prior consultation with the SGPC and the Akal Takht would show great cultural insensitivity and severely damage our relationship with the Indian Sikh community. Loss of our MPA school and increased worldwide security threats would be the likely results.

We acknowledge that same sex marriage is legal in the USA and many other countries, and we do not object to anyone’s right to do as they wish as long as others are not harmed.

We also recognize that Sikh Dharma International is a worldwide organization and needs to reach a consensus with all involved parties before acting.

The Siri Singh Sahib Corporation Board of Trustees recently established a Human Rights Commission. We ask that this commission be specifically tasked with engaging with the SGPC and the Akal Takht to reach a consensus on the issue of same sex marriage before any independent action is taken by Sikh Dharma International.