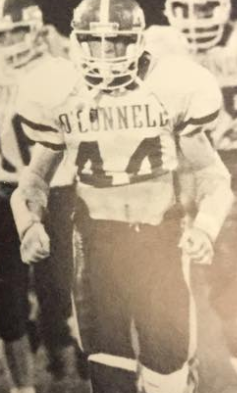 Today we formally nominate Mark Foley to become a member of
the next class to be inducted to the Hall.

There is no doubt in my mind that Mark is worthy of being admitted
simply on his stats as one of the hardest hitting most tenacious linebackers ever
to set foot in DJO. Notice how I left
out "for his size?"

Yes, that's correct, he was one of the best to play the linebacker
at DJO and unquestionably pound for pound the best football player we have ever
known. This is our main point why Mark deserves this honor. He played bigger than he was. There
was not a single game that he did not take on blockers that were sometimes twice
his size and he was good enough that opposing coaches often made him the
subject of double teams.

He trained his body in a way that he squeezed every drop of
talent into his game.

He studied film and tendencies of our opponents which gave
him have an uncanny ability to be around the ball at all times.

He did it all with class. He was hell on our opponents AND
he respected every person who had the guts to line up against him

Most importantly he inspired his teammates to become better.

It is this simple; if every player at DJO had Mark's work
ethic and passion for the game we would have never lost…

Don't believe me? Have a look at all the people who do: