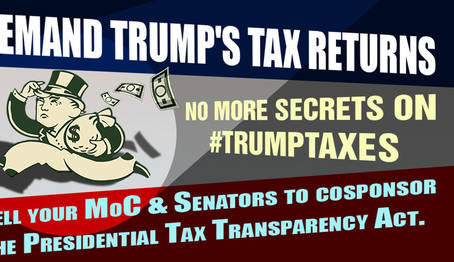 With the dizzying swirl of issues arising from Mr. Trump’s presidency, we are conveniently forgetting the fact that he has still neglected to release his tax returns. Every American citizen has a responsibility to contribute to the well-being of this country by paying federal taxes. Without being able to see Mr. Trump’s returns, the American people have no way of knowing whether or not he has contributed his fair share to the welfare of this country. Further, by not releasing his tax returns, Mr. Trump is hiding the business ties he has with foreign interests which may compromise his ability to govern with objectivity.

We are petitioning you, our state Republican representative in Washington D.C., to do your job and serve the American people by demanding the full disclosure of the last ten years of Mr. Trump’s federal, state, and local tax returns.

This is not a partisan issue; this is an American security issue. It is our right as citizens to demand transparency of our government and its leaders. Unless Mr. Trump is hiding something, there is no reason not to release his tax returns. On this tax day, we demand that Mr. Trump’s financial dealings step out from behind the shadows into the light.

Your Constituents from the State of Florida