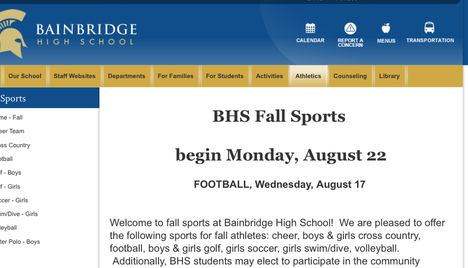 Marching Band is a Sport

We the students of Bainbridge High School would like to address an issue regarding the sport of Marching Band. We feel as if our sport should be recognized as a sport on the Bainbridge High School website underneath the athletics page. A Sport is defined by Oxford dictionary as "An activity involving physical exertion and skill in which an individual or team competes against another or others for entertainment." Also according to debate.org Marching band is in fact a sport. Marching Band requires hours of physical exertion and muscle work while at the same playing instruments that require the same amount of work as lifting weights in a gym with instrument weights ranging all the way from 3 to 25 pounds.

Marching Band also fits into the categories of being part of team and competing against others as we go to competition at least three times a year.

The next point we want to address is that BHS is already treating Marching band as a sport so it officially deserves that title. It is treated like an outside sport because of the fact that participation in this sport can get you P.E waivers. The reason they have this is because there is enough physical exertion to where we wouldn't have to take p.e. We hope you will consider placing Marching Band underneath the athletics page as soon as possible.