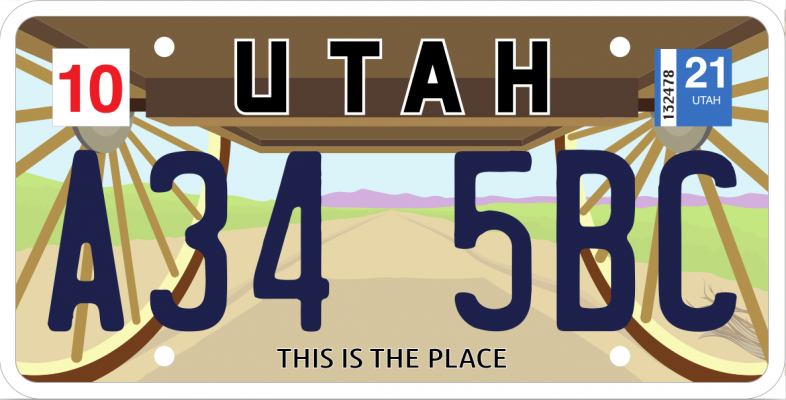 UPDATE (July): Pioneer Day is just around the corner and this effort continues to go forward! A few months ago, we put the legislation on hold to to ensure we have enough people committed to purchasing the plate. We know there will be thousands who want this plate but we want to show the demand before the next legislative session. This will also time the legislation with the 175th pioneer anniversary in 2022. Signing and sharing this petition remains critical!

We need at least 500 Utah residents who have registered Utah vehicles to sign this petition demonstrating a desire to purchase this plate. Having these commitments is crucial to bolster legislation that is currently being sponsored by Representative Melissa Ballard. Please sign and let your friends know about this and help make this plate a reality!

The plate is intended to recognize Utah's pioneer heritage as we approach the 175th anniversary of the pioneers’ arrival to the valley in 1847. The plate is an acknowledgement of pioneers of all stripes: from mountain men like Miles Goodyear and Jim Bridger, Mormon pioneers, non-Mormon merchants, US military personnel, miners and railroad workers to the first female voter. Ultimately, wagon wheels became iron wheels, auto wheels and then propellers and jet fans.

Many other states have plates highlighting their historical figures and legacy but Utah does not. Additionally, the plate will allow families and individuals to recognize the contributions made by their ancestors to the state (e.g. placing their ancestor's name or initials on a personalized plate, if desired).

Note 1: Thanks for the comments on the "This Is The Place" motto. The "This Is The Place" motto is currently a place holder for visual rendering. The motto may change on the final design if/when the plate goes into production, it is really up to the legislature and Tax Commission and DMV but we're happy to pass on your comments so keep commenting with your suggestions!

Note 2: The bill sponsor (Representative Melissa Ballard) and the design team continue assessing possible funding mechanisms including: the state funding the initial run with standard fees eventually recouping the cost (a standard issue plate), early adopters covering the cost of the initial run (such as pre-purchasing and paying $50/plate until the overhead is reached), or designating it as a special group plate (similar to the 2002 Olympic plate) where a fee is charged to cover plate cost and a portion is donated to a nonprofit. Our preference is that 'plate pioneers' fund the initial run cost so that taxpayers are not burdened with start up even if that cost will be recouped later.