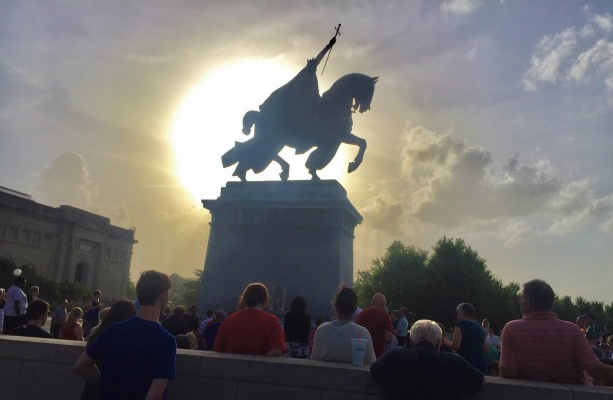 Make the feast of St. Louis a holiday in St. Louis City and County

We, the undersigned, call on the City and County of St. Louis to jointly declare August 25th, the Feast of St. Louis the King, a municipal and county holiday.

Currently, the City and County of St. Louis observe no public holiday that commemorates our local heritage and celebrates what unites us as St. Louisans. The observance of a holiday unique to St. Louis would promote the great civic virtue of pietas: devotion to the traditions and bonds that unite our community. In this moment, when revolutionary forces seek to obliterate our history, raze our institutions, and destroy the social fabric, it is more important than ever that we rediscover our common legacy and the mutual obligations that bind us to one another as St. Louisans.

As citizens of St. Louis City and County, there is no more appropriate figure for us to commemorate than St. Louis himself. Not only is St. Louis our namesake and patron, he is also a hero whose virtues all St. Louisans should emulate. St. Louis used his wealth and power to serve his people and seek the common good. He lived austerely, spending hours each day in prayer and feeding the poor from his own table. As King, St. Louis undertook major and lasting reform of the justice system, introducing and diffusing legal precepts we take for granted today, such as the presumption of innocence and trial by jury. He built and endowed hospitals, libraries, orphanages, and institutions of higher learning. He commissioned artistic masterpieces like the Sainte Chapelle in Paris to glorify God and gladden his people. The charity of St. Louis for all people of good will impelled him to lead two crusades for the salvation of souls and the liberation of slaves.

In the spirit of St. Louis, our civic holiday would be a day set aside for prayer, learning, the arts, and charity. Coming together as one people united under our celestial King each year will promote unity, justice, and peace throughout our City and County, strengthening our communion as proud St. Louisans. We therefore urge you to declare August 25th, the Feast of St. Louis the King, a municipal and county holiday.