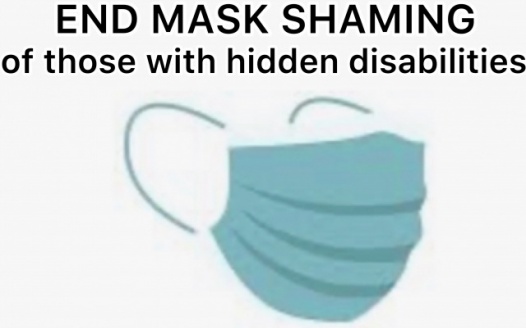 Mask shaming of people with hidden disabilities is being openly encouraged by government, politicians and public health officials. With mask mandates put in place in Northern Ireland and the UK there has been in increase in hatred and abuse of those who cannot wear masks due to physical or mental health issues. People with hidden disabilities are being refused entry to Shops and are having their privacy invaded, not only by some retail staff but by members of the public who are taking their pictures and posting them on Social media platforms. This discriminatory mentality is being endorsed by government campaigns sending subliminal hate messages that you don’t care about or respect others if you’re not wearing a mask. This is also a message being pushed by mainstream media. They refuse to advocate for people with hidden disabilities who cannot wear masks but instead have embarked on mask shaming campaigns which are inciting discrimination and hatred towards individuals who have protected rights under the disability discrimination act. People with hidden disabilities are fearful to enter Shops and use public transport thanks to the governments “wear one for everyone” mask shaming campaigns. We demand protection of our mental and physical well being within the law and ask that Mask shaming be classed as a HATE CRIME to afford us protections from the widespread discrimination that is currently taking place.