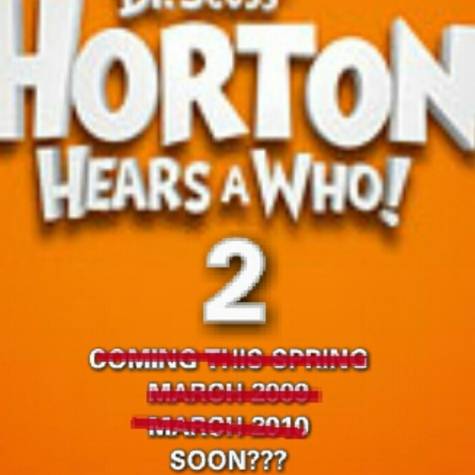 Make A Sequel to Dr. Seuss' Horton Hears A Who

Everybody knows that a sequel for Horton Hears a Who was once in consideration back in 2008. The first film recieved relatively good reviews and still has a reputation for being the finest of all the Dr. Seuss full-length films. However, the sequel never came to be, leaving fans still scratching their heads in confusion.

Even though a sequel may seem long overdue, it could still be made possible on the count of this is the era for movie sequels as well as television spin-offs. (I believe a tv series about Whoville would be neat! It would be wonderful to visit that world again.)

The film's characters are still loved and celebrated by fans. Horton is also a pretty prominent character in the Dr. Seuss book series, such as in Horton Hatches The Egg and Horton and The Kwuggerbug. He is also the main character of Seussical.

We haven't had a good Dr. Seuss film or television series in a long time. You were given the rights to a Horton Hatches The Egg film, Blue Sky. It's time to get on it!

Please consider making a follow-up for 'Horton' like you promised back in 2008. Be it a full-length sequel, or a TV series on NETFLIX, the fans are tired waiting. WE ARE HERE!