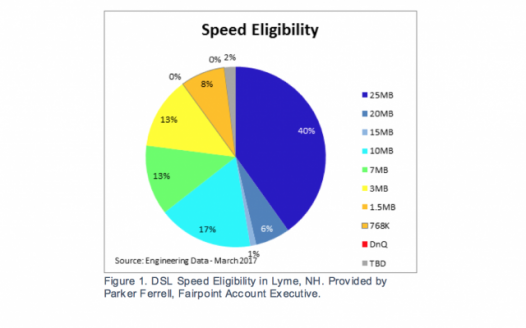 Improve and expand DSL service for all in Lyme, NH

As many of you know, Consolidated Communications completed its merger with Fairpoint last July. While this may result in no changes to the lousy status-quo of DSL in town, a few months ago I had an encouraging conversation with a local Fairpoint employee about what’s going on under the hood of this merger.

I was told that Considated is currently VERY receptive to broadband upgrade proposals in underserved locations, because they want to make this merger look good to the NH PUC. This local employee said because of Lyme's unique issues that have contributed to its shoddy DSL network, Lyme is an INCREDIBLY GOOD candidate for early improvements of its current network technology. In his opinion, we should make a request that our DSL network be improved for everyone in town (not just a lucky few near the Green) and that he would assist guiding our request to the proper group at Consolidated.

This is going to be accomplished by sending the following:

1) a short letter (found here: http://bit.ly/2CUjcvi) making our case about why Lyme has been underserved for internet service and how Consolidated improving the DSL network would help the community.

2) Letters of support from relevant New Hampshire agencies, including one from the Director of Broadband Technology at the NH Division of Economic Development.

3) A petition from as many Lyme residents as possible supporting such an upgrade.

I have the first two parts. The third point is what I need help with. I’d like a tally of those in town who would like Consolidated/Fairpoint to do more. I know there’s a lot of anger and resentment at Fairpoint, because they’re incompetent and unresponsive. It’s unclear at this point if Consolidated will do better for Lyme, but we won’t know UNLESS WE ASK. While there’s no promise that any upgrades will happen, the more of us saying we want things to improve, the better.