Lufthansa! Declare you will cease all shipments of crowd control chemicals to Turkey at once!

We call on Lufthansa to issue a statement explicitly stating they will not transfer tear gas or other crowd control chemicals to Turkey. Lufthansa is not dealing with a democratic institution and must be more vigilant. History will reward them. 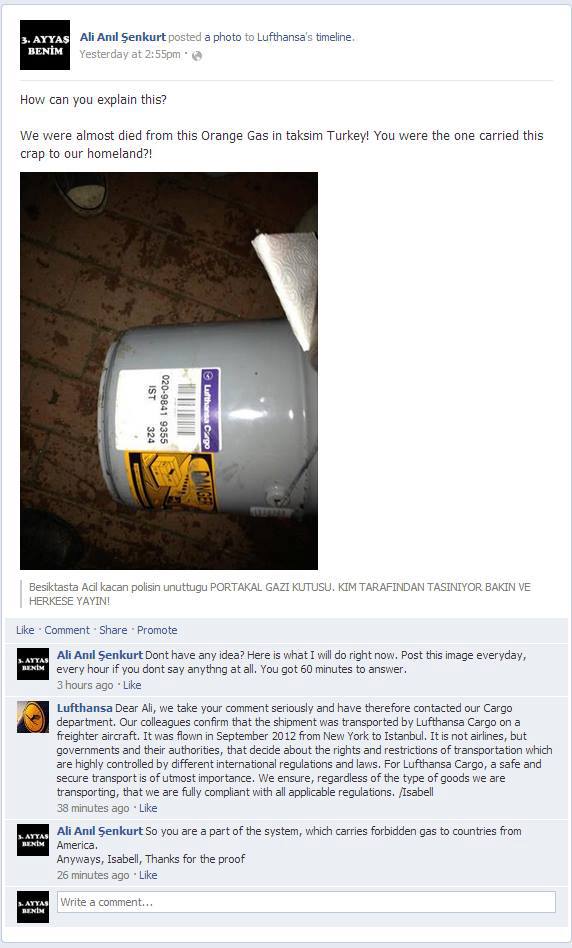 Have the senior management of Lufthansa ever felt the effects of tear gas? Have they ever been shot by a canister which specifically carries the instructions "Do not aim directly at humans"? Have they ever felt the effects of CS or CR gas in a closed space, when a police officer fired directly into their living room? Have they ever experienced first-hand the disproportionate use of force, being fired upon for expressing one's constitutionally guaranteed and universally democratic right to assemble and have one's voice heard?

Because if they did, they would have found a regulatory and moral reason not to ship such cargo for use by a police force which has demonstrated unthinkable brutality against its own citizens. Why does Lufthansa think it is okay to ship these as long as the right forms are filled out?

Lufthansa has a number of clients and a very high profile in Turkey. Its senior managers can prevent this from snowballing into something bigger right now. We call on Lufthansa to take a stand. Lufthansa must make it clear it will not aid and abet the ruthless persecution of peaceful protesters who have a right to have their opinions heard.

Lufthansa has an historic opportunity to do something right now. One decision from the company to not be an accessory to crime and violence will catapult it to the top of international press. There will be a groundswell of support for Lufthansa.

Sincerely,
Everyone with a thimble full of a sense

Update: Lufthansa has responded. Time to up the pressure.

LUFTHANSA has rejected demands to ban tear gas from its cargo services after it emerged a consignment used by police on the streets of Istanbul was carried into Turkey by the airline.

Pictures of a used gas canister in Istanbul’s Beşiktaş district bearing a Lufthansa Cargo sticker have been widely distributed on Facebook and Twitter, triggering a petition for the airline to change its policy

The German carrier confirmed it flew an “ammunition, tear producing” shipment described as a dangerous good from New York to Istanbul in September 2012. But in a statement to Londra Gazete, Lufthansa Cargo said it complied with “all laws and regulations” and that it was for governments to “define the rules governing the transport of goods”.

The airline added: “As an airline, we cannot assume to judge the moral legitimacy of a consignment, which meets all legal requirements, to a democratic country and NATO member like Turkey.

“Of course we stand for transparency and welcome any open discussion - also on our Facebook site. We are taking the events in Turkey and your comments regarding these very seriously.”

But Işık Oğuzertem, who is campaigning for a promise not to carry dangerous chemicals in future, said Lufthansa needed to consider the morality of its position, not its legality.

“We understand Lufthansa are in compliance with applicable regulations,” he said.

“Lufthansa is not dealing with a democratic institution. We call on Lufthansa to be more vigilant. History will reward them.”