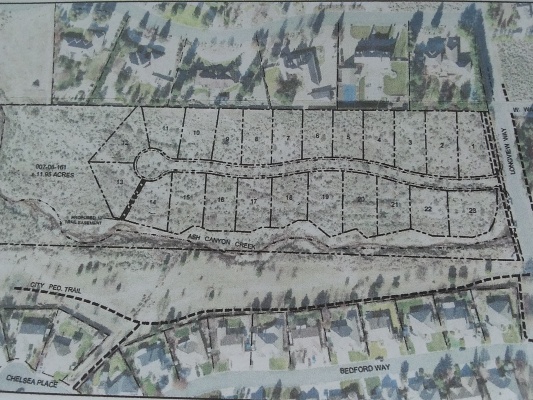 We, the neighbors of the planned Longview development in Carson City request that you honor the decision of your Predecessors with respect to the zoning of the 11.95 acres situated west of Longview Way and north of Ash Canyon Creek. The current zoning is for one-acre home lots. According to a December 26, 2020 article in the Nevada Appeal, the Developer wishes to build a street, a cul-de-sac, and 23 homes on approximately 7.5 acres, leaving 4.5 acres as is.

We request that you honor the promises made as homes were purchased around this development. When those purchases were made, it was disclosed that the area in question is zoned for one-acre lots.

When the project property was purchased by Hop and Mae Adams, it was with the intent to develop it as one-acre lots.

Ash Canyon Creek creates a natural southern border of the property. Adjacent to this project, to the north and east, are one and two acre home lots.

Longview Estates, to the east of the proposed development, consists of one-acre lots.

The properties along Brush drive and west Winnie Lane are one and two acre lots.

In summary the area north of Ash Canyon Creek, including this proposed development, is zoned for one and two acre lots. We request that you continue this tradition.

On December 22, 2020 two Representatives that favor re-zoning the area to smaller lots conducted a Zoom meeting with some of the neighbors. They compared the proposed project to the Kings Canyon Highlands development. Kings Canyon Highlands is separated from the project by Ash Canyon Creek and Carson City open space.

The neighbors explained that the project is contiguous with Kingston Park and Longview Estates. The project is on the same side of Ash Canyon Creek as those larger properties. It seems disingenuous to compare the project to a development that is more distant than those adjoining neighborhoods.

The neighbors asked why there is a need to change zoning from one acre lots to smaller lots. The answer provided was that one-acre lots are not possible on this land that is zoned for one-acre lots. It was not explained how twenty-three partial acre lots could be accommodated.

In 2004 the entire area of the proposed project was destroyed during the Waterfall Fire. It seems counter intuitive to increase housing density in such an area.

We Carson City residents favor keeping this site as open space. If that is not to be, then we request a compromise.

Instead of constructing a neighborhood that is more compact than the adjacent properties, please maintain the one-acre plan that was envisioned by your Predecessors, and by Hop and Mae Adams.

Thank you for you time and consideration.