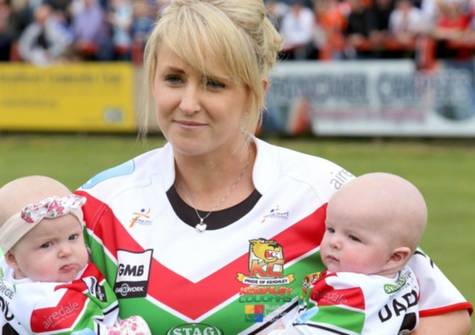 Lizzi Jones for Woman of Steel 2015

Lizzi Jones is a Wife, Mother and an inspiration. Lizzie is the wife of rugby league player Danny Jones and eight-month-old twins Bobby and Phoebe.

Danny who played for Keighley Cougars won 12 Wales caps and scored over 1,000 points in 150 games over two spells with the West Yorkshire club after starting out at his home-town club Halifax.

Lizzie has not only shown incredible strength and courage during the heartbreaking loss of her husband but has continued to keep the memory of her beloved Danny alive by undertaking a successful campaign that will see all Rugby League players undergo compulsory ECG's so to detect any potential cardiac issues.

Danny died from undiagnosed hereditary heart disease after collapsing during a match against London Skolars.

Since then Rugby League fans, players, administrators and the wider public have donated over £230,000 to a trust fund set up by the RFL Benevolent Fund to secure the futures of Danny and Lizzie’s children.

Her performance ahead of the final between Hull Kingston Rovers and Leeds Rhinos will see Lizzie follow in the footsteps of Danny, who represented Wales at the national stadium in a Four Nations fixture in 2011.

Lizzie Jones said: “I can’t thank people enough for what they’ve done. They’ve made the most horrific point in my life a little bit more bearable. The kindness has been overwhelming.”

Lizzie currently combines her role as a mum with coaching aspiring young singers and teaching audition techniques, and has previously sung professionally at theatres across the country, including the West End.

Lizzie has not only been a beacon of light and a source of inspiration but she continues to love and support the sport her beloved Danny lived for.

It is now time we recognised the strength and courage of this amazing woman with a permanent award. I would like to suggest an annual "Woman of Steel" Award, much like the Steve Prescott 'Man Of Steel' Award named after the late, great Steve Prescott, the Woman of Steel is awarded to a female who has been not only a great servant to the sport but someone who goes above and beyond to spread the word of Rugby League and the players and community.

Please sign this petition and let's make this happen, Rugby League despite it's appearance as a male dominated sport, is deeply entrenched with female staff, players, journalists and volunteers up and down the country.

Lizzie Jones, you are our inaugural 'Woman Of Steel' in both heart and spirit.

RFL - Please make this happen, it is not only a fitting award but will be an award that will be a long lasting legacy for Danny Jones and all whom make Rugby League the only sport in the world to truly be a Family Sport.