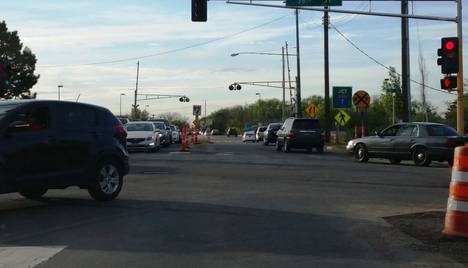 THE GOAL: ADD TRAFFIC LIGHTS TO WOODDALE BRIDGE OVER 7 TO IMPROVE TRAFFIC FLOW, CALM TRAFFIC, AND IMPROVE SAFE TURNS ON AND OFF THE BRIDGE.

Between 2011-2014, since the opening of the Wooddale Bridge, the number of accidents on the ramps was 13 westbound, and 17 eastbound.

In 2014-15, there were 29 accidents in the first two months of Minnetonka Blvd being closed.

This is TRIPLE the number of accidents.

THE ISSUE IS TWOFOLD: TIME and SAFETY

First, there are two schools within 100 yards of this bridge. Walker Street is home to 29 buses daily. The current setup of the bridge is causing students who use busing to be delayed and late for school on an average of 23 minutes per day.

Second, it's a safety issue. From school buses, to passenger vehicles, to bikes and pedestrians, it's an unsafe area all around.

It's not just a bridge, it's a main thoroughfare for north, south, east and west travel.

The closing of Minnetonka Boulevard has made this area uncontrollable. The 19,100 vehicles that normally travel Mtka to get onto Hwy 100 have been diverted through this area. When Minnetonka re-opens and Hwy 7 closes, the number of diverted/detoured vehicles will more than double. We know that Wooddale Bridge will be a player in this detour. Which is why we need traffic calming.

WHAT DO WE PROPOSE?

When the bridge, which is owned by MnDOT, was opened in 2011, it was built with conduit in it. What we are proposing is that MnDOT fish the wires and place traffic lights to help the traffic and congestion of the Bridge. (Estimated cost: $700,000 - but with the basic infrastructure already in place.)

The traffic backs up from Lake Street to 36th Street. The bridge is the center of the problem.

SIGN ON NOW to let MnDOT we need them to take action to make Wooddale Bridge a safer area to drive, bike and walk - NOW.