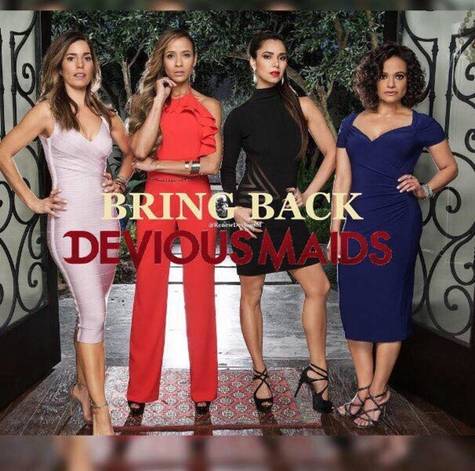 I am writing this petition to encourage who run the lifetime television program Devious Maids to renew the show sadly it was cancelled on September 1, 2016. The show has attracted so many viewers of all ages since it started in 2013 and I feel there is still more stories to be told.

During Season 4 it had the attention and interest of each and every one of its fans right until the last episode. The show isn't ready to cancelled. As I've been looking online there have been so many fans from all over the world asking for Devious Maids to be renewed. Many fans have started a hashtag #DeviousMaidsSeason5 for it to be recognised by ABC/Lifetime and the cast who star in the series.

This show had amazing actresses and actors, fantastic story lines that left us on the edge in anticipation. This is one of few television series that feature Latina leading actresses and that saddens me. Ana Ortiz, Judy Reyes, Dania Ramirez and Roselyn Sánchez have brought something special to this television series and the bond they share together is one in a million.

Please join me and fellow fans in showing your support, to Devious Maids! Please sign the petition and copy and share the link to spread the love along with the hashtags #DeviousMaidsSeason5 #BringBackDeviousMaids and lets get as many signatures as we can for it to be noticed! Like our Facebook page www.facebook.com/RenewDeviousMaids and follow our twitter page too www.twitter.com/RenewDeviousM

Creator of The Petition