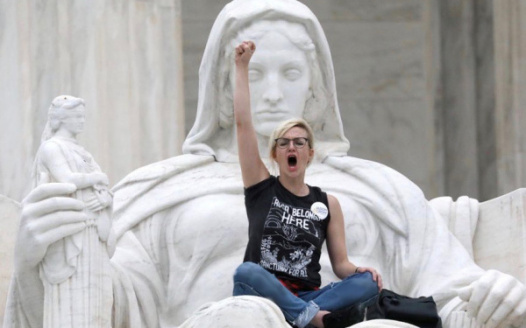 Letter to the U.S. Senate: from America

Dear America: Please write your zip and state in the comments after your signature!

I WILL NOT FORGET

A Letter to the U.S. Senate

Today I and many other Americans despaired as we watched Brett Kavanaugh be anointed to the highest court of our nation. As the ‘yes’ voting Senators ignored countless passionate protestations in the streets, halls, elevators, emails, and petitions, I imagine they assuaged any fleeting insecurities about their hubris by reassuring each other that the grumbling public will complain for a short while and then, thankfully, forget. As the Senate majority leader just said to reporters, “these things always blow over.”

To the Senate, Mr. Kavanaugh, and my fellow Americans, I have a promise:

I, for one, will not forget, and my memory is long.

…that our highest judicial body in the nation now contains not one but two sexual predators accused by credible, articulate women who risked everything to speak up. The accusers’ incurious detractors claimed the ‘available’ facts were insufficient evidence to reverse course. And yet common sense reveals what was in evidence was overwhelming truth of character and integrity from the victims.

As such, I believe them.

…the people who fought, suffered, and died for every woman’s right to her voice, her choice in our country.

As such, whether or not the Supreme Court rules to restrict women’s rights, I will rally my community to ensure access to safe, comprehensive family planning for all women. I will promote protections of girls and women over any unjust rule of law, as I recall the words of historian Howard Zinn, “It would be naive to depend on the Supreme Court to defend the rights of poor people, women, people of color, dissenters of all kinds. Those rights only come alive when citizens organize, protest, demonstrate, strike, boycott, rebel, and violate the law in order to uphold justice.”

…how white male Senators defended Kavanaugh’s belligerent and vindictive defense. I will not forget how those same Senators reduced an experienced prosecutor to a ‘female assistant’ like some seeing eye dog commanded to protect them from their own blind misogyny. I will not forget their fulminations reminiscent of a cabal of schoolyard bullies rallying around their anointed ringleader as a means to obfuscate their barefaced prejudice, illuminated by their discomfiture when we plebeians dared question their disregard for fairness or due process.

As such I will help my friends around the nation replace those Senators with people who hold compassion, veracity, and justice above cupidity; and I will be diligent in empowering millennials to vote and fight for the betterment of our faltering democracy.

As so to Mr. Kavanaugh and all his back-slapping supporters: You have made me feel angry. Not just some momentary, meme-fed outrage. This is the slow to boiling wrath of a woman so fed up with the gender intolerance, glass ceilings, double standards, and invalidation that I say woe to the person who disregards or disrespects my rediscovered purpose, buoyed by the certainty of Maya’s refrain, “However I am perceived and deceived…I shall not be moved.”

…how an assault victim risked her career, reputation, and family to speak up, exposed to raw judgement by millions, while our President mocked her courage publicly. I will not forget how the same President bragged about being a pussy-grabbing predator while being accused of sexual assault by more than twenty women, an infamous first in presidential history.

As such I will do everything in my power to unseat this President and every politician who supports him or remains silent about his words and behavior, behavior we would find abhorrent in our own children.

… how judge Kavanaugh’s hypocrisy and lack of probity were laid bare by his own words. I will not forget how he declared in his job interview that “the Supreme Court must never be viewed as a partisan institution,” followed by a carefully prepared statement days later where he aggressively accused Democrats of conspiring against him unfairly via a far-fetched ‘liberal’ conspiracy. I will not forget how Kavanaugh lied under oath while Republicans in the Senate deliberately concealed his recorded history from their colleagues and the public.

As such I cannot respect as credible any majority ruling he contributes to, and I will energetically support all efforts to unseat him. I will support only judges who have a demonstrated record of impartiality, compassion, and rectitude. I will strongly encourage my fellow voters do the same, and to fight any appointments of judges who are lacking in such.

…each and every one of those who voted to seat Kavanaugh for life, for they are complicit in invalidating the real-life victimization of millions of constituents. U.S. federal records tell us one in five women in the U.S. will be raped, and one in four girls will be sexually abused before they turn 18.

As such I will work to ensure that misogynists who abuse their positions, regardless of reputation, are publicly revealed and removed. I will help my local jurisdiction be better at investigating and prosecuting rapists and other abusers.

I will not forget.

…the Democratic Senators who quietly voted to oppose Kavanaugh. Your vote is applauded and vital. However, your silence outside of the vote hurt us. We counted on every one of your voices to collaborate in speaking truth to power; here silence is not golden.

As such, to find your voice I recommend you spend less time with glad-handing lobbyists and Harvard-educated advisors, and more with your voting constituents: the victims of injustice, the beleaguered poor and declining middle class who wear the scars and carry the burden of our nation’s corruption on their overburdened, sick, and disenfranchised backs, the youth of our nation who desperately need outspoken role models that boldly defy the cowardice, avarice, narcissism, and intolerance that has permeated our society.

…the Democratic Senators who publicly challenged Kavanaugh’s nomination fiasco. You have our immense gratitude. You are our champions, the elite chosen to represent us, and your responsibilities in these tumultuous times are heady.

However, your faith in a completely corrupted process was ineffective. It allowed an immoral man to be placed in a position that can promote the suffering and disenfranchisement of many for decades to come. Many of us predicted this outcome, and so I must ask, why didn’t you? We witnessed an unprecedented hijacking of due process, as such it required an unprecedented response to stop it.

But you did not opt out of the game of cheaters; you did not stage a boycott, an organized protest, or civil disobedience. You relied on hope for change from a reliably intransigent, unethical majority instead of taking extreme but necessary action. I do not criticize failure; routing out corruption is a slow, messy process. But you can’t fail when you don’t try. Such action may seem too unconventional, outrageous, risky. And yet it would inspire tremendous support from a nation desperately awaiting a worthy hero. We the People take scary risks in our careers, relationships, health care, and lives, every day, and must therefore expect no less of you.

I implore you to step out of your comfort zone no matter how vulnerable that makes you feel, because we can’t do it for you. We need champions not with superpowers, but a moral compass that does not falter. As President Lincoln said, a compass will “point you true north from where you're standing, but it's got no advice about the swamps, deserts, and chasms that you'll encounter along the way.” As long as wisdom, tolerance, compassion, and the common good comprise your true north, I promise to have your backs as best I can regardless of the brutality of the topography you maneuver.

To stay the course you must manifest courage not just in the spotlight, but the way many of us do: alone and weary, in the darkest hours of the night, when doubt and criticism viciously rattle our faith in ourselves, and yet we push forward anyway. When you do, I promise that your contribution will be hailed in the collective memory of those who matter.

I am not wealthy, famous, or an elected official. But I believe I am one of many Americans who feel the same. I ask them to join me in this promise.

I will not forget.