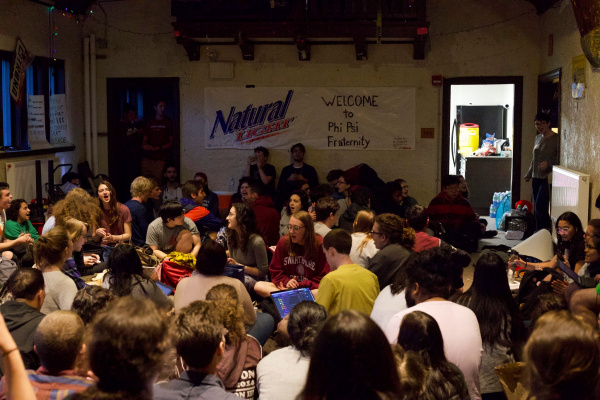 We, Princeton IX Now, see and support Organizing for Survivors (O4S) – a Swarthmore College student group advocating for survivor-centered structural transformation on their campus. We stand in solidarity with their struggle to have the Swarthmore administration realize their demands in commitment to the rights of survivors and protesters, and we fully support their active efforts to engage the College administration.

During a five-day sit-in held by members of O4S and the Swarthmore Coalition to End Fraternity Violence occupying one of the College’s two fraternity houses, both Swarthmore fraternities, Phi Psi and Delta Upsilon, decided to disband on their own. The student activists and organizers felt that this was not enough, and they moved their sit-in to the office of the President and the hallway just outside. This transition was made to further pressure the College administration to institutionalize this disbanding, to dissolve the fraternity house leases, and to instigate a just reallocation process for the fraternity houses. It was in this transition to administration that the College exercised the force of the police against its own students.

It is crucial to note and condemn the confines imposed by Swarthmore to oppress the freedom of speech of all protestors. By calling law enforcement on their students, Swarthmore is prioritizing the safety and security of white protestors while silencing and alienating brown and black bodies from the movement. This implementation of systemic racism as a method to suppress student activism is unacceptable, especially by an institution which praises itself for fostering a diverse and inclusive environment.

While this past week Swarthmore University made strides in reaching goals set by O4S and the Coalition, we want to emphasize that full credit should be given to the student organizers for their ideas and the work that they have done to reach this point. Failing to acknowledge their efforts and diligence completely invalidates the sacrifices and erases the voices of survivors and allies who are fighting for the safety of their campus. There remains much O4S is still fighting to achieve regarding the rights, safety, and security of survivors and we expect Swarthmore college to do more to address these demands immediately.

The lack of institutional support for their students is not only demonstrated in their inadequate measures to address violence in the campus community, but also in their unwillingness to communicate with the very students they claim to serve and protect. It is appalling that institutions that are beacons of higher education, such as Swarthmore College and Princeton University, do not recognize that communication with students is integral to creating an educational environment wherein all students can flourish.

To the Swarthmore administration: You can and must do better to hear, support, and act on the well-researched and survivor-centered demands of O4S, giving them due credit for these transformative ideas.

Now and moving forward, Princeton IX Now remains an ally to O4S in this continued struggle, fighting to transform the structures that allow violence to occur on Swarthmore’s campus.

We encourage you to do the same by signing on to this letter of support, to stand in solidarity with O4S and survivors everywhere.

In solidarity and love,