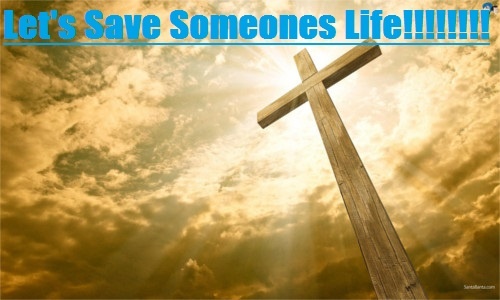 could you pray for Jesse he wants to commit suicide.

He is a friend of a friend, in fact, he loves her and she really likes him and it breaks my heart to see her read messages that he sends saying that he loves her but it's for the best.

I don't personally know him but now I know that he wants to kill himself I feel like I have to do something but I don't know what, I don't have him on any social media and I don't even know his last name so I can't alert the police so all I could think of was to pray and ask other people to pray.

I don't know if your a Christian but If you could and ask other people to pray that would be awesome.

I want Jesse to see that even if some people tell him it would be better for everyone if he killed himself that it actually wouldn't.

It breaks so many people's hearts if he did. Heck I don't even know the guy and even just talking about is making me cry during home group I try really hard to stop myself but this time I can't.

I want this guy to live I want him to feel God's love.

I think that if enough people are praying for him he might feel it. I would hate it if he did kill himself and I knew I didn't do anything to prevent it so I'm going to do everything in my power to stop it.

The more people that pray the better.

We can not just be saying empty prayers we need to pray hard and believe that God can do miracles. Please pray for him even if you're not Christian and ask friends to as well.

Let's show Jesse the love and grace of Jesus Christ and show him that his life is worth living and more people then he things wants him to not commit suicide.